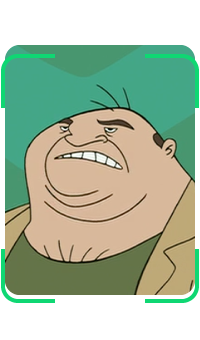 "Big Daddy" Brotherson is a well-connected figure in the criminal underworld.[1] He typically has detailed knowledge of any major criminal activity or potential targets, and sells this information to make a profit.[2]

Though he can be very serious, "Big Daddy" Brotherson is best known for his childish side, which delights in playing silly games and basically teasing his clients until he is finally ready to make a deal. Anyone who refuses to play along is swiftly and roughly dismissed by his bodyguard.[1][2]

"Big Daddy" Brotherson first encountered Team Possible at the black market, where they were searching for a lead in Professor Sylvan Green's kidnapping. Global Justice agent Will Du tried to force the information out of Brotherson and was immediately tossed through a window. Kim Possible was able to persuade Brotherson to give up the information with a chocolate bar.[1]

Dr. Drakken approached Brotherson in an attempt to buy information on the cybertronic technology he needed for his latest plot. After several tries, Brotherson finally gave Drakken some very ironic news: that the only genuis to crack the secrets of cybertronics was Dr. James Possible, Drakken's former college friend and Kim's father.[2]

No matter where he goes, "Big Daddy" Brotherson always keeps an enormous bodyguard with him to handle unwanted visitors or rude guests.[1][2]

From "So the Drama"

Brotherson deals with Dr. Drakken
Add a photo to this gallery

He is voiced by Maurice LaMarche.

Retrieved from "https://kimpossible.fandom.com/wiki/%22Big_Daddy%22_Brotherson?oldid=31025"
Community content is available under CC-BY-SA unless otherwise noted.