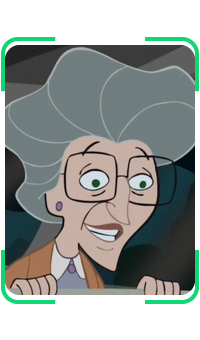 "Nana" Possible is the mother of Dr. James Possible and "Slim" Possible. Due to her age and experience, she is the recognized matriarch of the Possible family.

Much like her granddaughter Kim, Nana once lived a life full of adventure and danger. As a result, she tends to be concerned for Kim's lifestyle at the least and seriously overprotective at the most.

Nana is the only known Possible family member who shares Kim's green eyes. She has a large aquiline nose, silver-grey hair, and a slight slouch common to the elderly.

Nana tends towards older styles of clothing such as house coats and knitted sweaters.

Nana has at least once worn the Kim-style uniform of cargo pants and a black turtleneck.[1]

Nana tends to be somewhat old-fashioned in her way of thinking despite her own earlier exploits. This is evident in her treatment of Kim, who she insists on referring to as "Kimberly Ann" and takes much pleasure in dressing up in an elder fashion sense, contrary to the modern styles that Kim prefers such as her midriff bearing tops and baggy cargo pants.

Nana is stubborn in her beliefs, to the point that when she doesn't want to listen to something she will turn off her hearing aid. However, she is the matriarch of her family and comes to accept that Kim isn't merely in a "phase" of adventuring, but lives a lifestyle of world saving.

Nana has an iron will and little tolerance for panic or cowards. This is shown when she told Steve Barkin to go hide in a closet if he cannot keep it together during the Lowardian Invasion[2].

By the time she was sixteen, Nana had trained with Shaolin monks and perfected the ancient art of Pang Lang Quan Kung Fu, a form of Northern Praying Mantis. It appears that she knows more than just Pang Lang Quan style, since when she sparred with Kim and beaten her, she displayed a style similar to Kim's general martial arts style and exceeds it.[3] Even into her later life, Nana clearly retained much of her martial arts prowess and military bearing, able to keep up physically with the likes of Kim and Shego.[3][1]

Nana was the first woman to complete the US Navy's underwater-demolition training program[3].

Nana was a top solo aviatrix[3].

Nana was a formidable cook, famous for her lemon squares.

By the age of sixteen, Nana had mastered Mantis style kung fu. Shortly afterwards she became an accomplished solo pilot. She went on to participate in and become the first female to graduate from the US Navy Underwater Demolition Training Program.

During Kim's early sophomore year of high school, Nana lived either in or very near to Middleton, since James and Ann left Jim and Tim with her when they chaperoned the Mount Middleton Ski Trip[4]. Later that year, during Middleton High School's spring break, she moved to Florida[3].

She is known to be the mother of Slim and James Possible. It is unknown if she has any other children besides her two sons.

She is Ann's mother-in-law, as well as the paternal grandmother of Kim, Jim & Tim, and Joss Possible.

Shortly after moving into Chez Leisure, Nana made friends among the community, including Mr. Simmons, Mr. Stanley, and Mrs. Greenfield.

Nana Possible is voiced by the late Debbie Reynolds, herself a famous teen and young-adult actress and singer for Warner Bros and MGM, paralleling many young Disney stars including Kim Possible's own Christy Carlson Romano.

Nana is first mentioned, but not shown in Downhill.