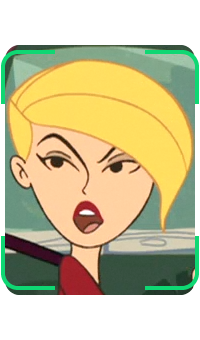 Adrena Lynn was a TV teen action star who specialized in "extreme" death-defying stunts. In reality, she faked all of her stunts, and was exposed by Kim and Ron when Kim tried to save Lynn from a failed bungee jump stunt only to discover Lynn didn't in fact perform the stunt herself, instead using a stuffed stunt-double dummy.

It was really Ron who exposed her to the press as being a "FAKE". Her catchphrase was to exclaim the word "freaky" in sentences, placing the emphasis on the "eaky" but not the "fr". Adrena Lynn attempted to get revenge on Kim and Ron for exposing her as a fraud, but was defeated and sent off to jail after a death-defying battle at the abandoned fair grounds in Middleton that ended with Adrena Lynn being exposed once again as a coward by her own self-admission.

Adrena Lynn is a hard character who is an extreme form of a bad and powerful girl. She pretended to adore the danger and that she could to take it to extremes.

As a major villain

Adrena Lynn was originally going to be a major villain on the show. She was put in many of the show's promotional images and was one of the villains who fans were allowed to e-mail on the DisneyChannel.com/KimPossible website (before 2007). However, she proved to be unpopular with audiences and was written out of the series as a result. Currently, her only other appearances were in the video game Global Gemini for the Nintendo DS and a cameo in the end credits of Graduation, Part 2. 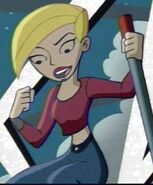 She is voiced by Rachel Dratch.

Retrieved from "https://kimpossible.fandom.com/wiki/Adrena_Lynn?oldid=32227"
Community content is available under CC-BY-SA unless otherwise noted.