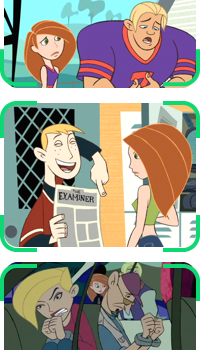 "Extreme teen" Adrena Lynn seeks revenge on Kim and Ron after they inadvertently reveals that Adrena's stunt show is fake.

Ron, wanting to write for the school newspaper, interviews Kim, but takes her quote about quarterback Brick Flagg being "hot" out of context. Ron's article embarrasses Kim and leads to Brick asking Kim on a date, which she is reluctant to go on.

Meanwhile, Ron, Jim, and Tim are fans of TV stuntwoman Adrena Lynn, but Kim considers her a bad influence on children who imitate her stunts (such as her brothers). Kim catches Adrena Lynn faking a stunt, and Ron's report on the fraud makes national news and causes Adrena Lynn's show to be canceled. As a result, Adrena Lynn plots revenge on Kim and Ron.

Main article: All the News/Transcript

Brick: Hey
Kim: Um, hey, Brick.
Brick: Uh, nice outfit.
Kim: Thanks. It's, er, my size.
Brick: You know, I think what you do is really amazing.
Kim: Oh saving the world is no big.
Brick: I mean how you always spelling stuff in your cheers. It's so C-O-O-L... (pauses) That's cool, right?

Kim: Ron, you ferociously misquoted me!
Ron: Woah. I may have done a tiny bit of rephrasing but, come on. You'd think a crime-fighting cheerleader would give a more interesting interview. The paper liked my story so much to giving me a column!

Ron: (to the cafeteria lady) I'll have an omelet, whites only. (gets a heap of greasy food) (to Kim) She must not know who I am.
Kim: I'm not sure I know who you are.

Brick (to Wade): Hey, you're Kim's computer dude.
Wade: And you're that "Kim thinks you're hot" dude.

Kim: Ron, get over it, already.
Ron: Sorry, KP, but discovering that your action hero is a big fake is not something you just get over.
Kim: And this from a wrestling fan?
Ron: I don't get the connection.

Kim (to Jim & Tim): You were doing what?!
Jim: Bungee jumping out of a blimp, like Adrena Lynn.
Tim: Only we didn't have a blimp, so we used the roof.
Jim: And we didn't have a bungee cord, so we used yarn.
Mr. Dr. Possible: That Adrena Lynn is a menace!
Mrs. Dr. Possible: She didn't really bungee jump out of a blimp. Don't you boys watch the news?
Jim: No. The only show we watch is Adrena Lynn. Hey, it's time! (switches on the TV)
TV announcer: And reports that Adrena Lynn is a fake, coupled with the rash of copycat stunts across the country...
Tim: That's us!
(He and Jim high five)
Jim: Ow!
TV announcer: ...has prompted this network to cancelled Adrena Lynn in favor of more responsible programming. So, stay tuned for an extra hour of "Stuff On Fire"!

Kim: (sighs)
Mrs. Dr. Possible: Is something wrong, honey?
Mr. Dr. Possible: (pause) You have our undivided attention. (pause) The TV's broken.
Kim: Ron made up a story about me liking the quarterback, and now I'm stuck dating him or we'll lose the big game. Meanwhile, there's a worldwide satellite crisis.
Mrs. Dr. Possible: Kimmie, you have to be honest with Brick. If the football team loses, it's not your fault. (pause) I can't help you with the satellite thing.

(As Kim and Ron are driving through the woods on Ron's scooter)
Ron: Kim, the only thing down this road is the old Middleton Fairgrounds.
Kim: That, and Adrena Lynn.
Ron: That place is haunted. Plus, I lost ten bucks trying to win a stuffed hippo.
Kim: Too bad, Ron. If it weren't for you and your stories, we wouldn't be here!

Mr. Dr. Possible: Jim, Tim, there'll be no rooting for your sister's foe!

(After Kim has saved Brick)
Kim: Let's see. (imitating Adrena Lynn's voice) What will I do next? (takes Adrena Lynn and flies high up with her using a jetpack)
Adrena Lynn: I do extreme stunts for a living. You think I'm afraid of heights?
Kim: You fake extreme stunts. Let the world see how brave you are when there's real danger. (flies wildly) Not so extreme after all now, are you? Are you?!
Adrena Lynn: (terrified) No.
Jim & Tim: (while watching it on television) Now she tells us!

Ron: Headline: Quarterback sacks Kim Possible! She has a dislocated heart and will be out for the remains of the season!
(Rufus shuts Ron's mouth)
Kim: Thank you.

Retrieved from "https://kimpossible.fandom.com/wiki/All_the_News?oldid=35917"
Community content is available under CC-BY-SA unless otherwise noted.