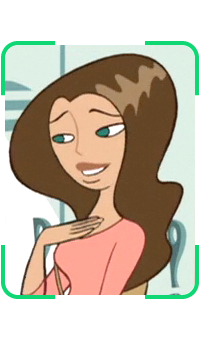 She was a Senior during Kim's Sophomore year, yet was still at the school during what would have been Kim's Junior year.

Amelia is shown to be shallow and snobbish.

Amelia has shown interest in Ron Stoppable when he did things which made him unusually popular, such as when he got a new haircut[1], became a notable yellow journalist[2], and became a millionaire from his Naco royalties[3].

Amelia had dated and dumped Brick Flagg sometime prior to Ron writing the article about Kim liking Brick[2].

Amelia was seen sitting on the shoulder of an unnamed football player in a picture [5].

Bonnie Rockwaller saved a seat for Amelia at lunch[4], which may have been practice.

Amelia was also seen in the company of up to three unnamed female seniors[1].

Amelia and "friend"
Add a photo to this gallery

Amelia was voiced voiced by Carly Pope[6] and Tara Strong in season 1[7].

During the early part of Ron's Sophomore year, when Kim made him get a new haircut, he referred to Amelia and a group of other girls as Seniors. Therefore, it is likely she was 17 or 18 years old.[1].

Retrieved from "https://kimpossible.fandom.com/wiki/Amelia?oldid=32076"
Community content is available under CC-BY-SA unless otherwise noted.