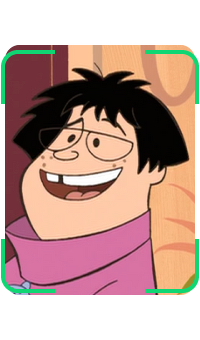 Amy Hall is one of the world's foremost biogeneticists with a special talent for gene splicing. She is also an avid collector of Cuddle Buddies, a beanie baby pastiche that generally consists of two different animals combined into a single plush toy, a passion which had influenced and disgraced her career when she elevated the hobby to live subjects, including human testing, and earning her the nickname DNAmy.[1]

Amy had black hair which is fashioned in a rough bowl cut. She was short and stocky in build and always wore glasses. [1]

Amy wore two-tone turtlenecks and matching pants, generally with an Otterfly, her favorite Cuddle Buddy, attached to her chest.[1]

Amy was rather atypical compared to the other villains that Team Possible faced, although if asked, she would most likely not categorize herself as a villain at all. Specifically, her profession and hobbies would classify her as a mad scientist, but her motivations were drastically different from the expected goal of ruling the world. Amy's gene-splicing experiments were ethically dubious at best –especially when it came to genetic experimentation on people against their will– but she generally had no intention of doing anything overtly evil with the monstrosities she created. In fact, she did not actually even view them as such, but as a realization of her dream to create living Cuddle Buddies. So if anything, Amy was categorized as insane due to her experiments on living subjects.

Amy was also incessantly cheerful, obsessed with anything cute or fluffy, and habitually peppered her speech with little expressions which would have been cute if she was a child instead of an adult, such as referring to people she disliked as "meanies". She had a tendency to be openly flirtatious and affectionate, had a series of one-sided crushes on certain men, and was extremely susceptible to flattery.

Amy Hall, known as DNAmy by her former colleagues, was a disgraced biogeneticist shunned by the scientific community for unorthodox and unethical splicing experiments. Amy was easily the most dedicated "cuddler", or Cuddle Buddies collector, in the world, and was proud to have been a past president of the Cuddle Buddy Collectors Club. After collecting every cuddle buddy ever made, she was still unsatisfied and so began splicing together the DNA of real animals to reflect the chimeric nature of the stuffed toys.

She was first encountered by Ron and Mr. Barkin during a sophomore class ski trip to Mount Middleton while searching for the Mount Middleton Snow Beast, which turned out to be one of her creations: a gigantic cross between a rabbit or hare and a rhinoceros. Amy took Ron and Mr. Barkin prisoner after their discovery of the creature threatened to expose her presence and experiments. She successfully melded Mr. Barkin with Rufus to create a naked-molerat-man, and was about to experiment upon Ron next before being defeated by Kim Possible.[1]

Amy reappeared Kim's junior year partnered alongside Dr. Drakken, who had sweet talked her into creating a giant reptilian hybrid creature with which to destroy Middleton as a prelude to taking over the world. Drakken eventually developed real feelings for her after Amy saved his life, but she asked if they could be friends instead. As it turned out, Amy had been the scientist who genetically altered the villain Lord Montgomery Fisk with simian hands and feet so that he could become Monkey Fist, and was fixated on him.[2]

She has been in prison a few times, and was there to witness, and apparently enjoy, Señor Senior, Junior's debut performance as a pop star.[3]

Amy next appeared near the end of Kim's junior year, when she kidnapped Master Sensei of the Yamanouchi Ninja School in Japan, making it seem as if Monkey Fist was the perpetrator. She did this in order to trick Team Possible into tracking him down for her, so that she might forcibly win his affections. With her usual obsessive behavior, she had grafted to herself the arms and legs of a gorilla. Even going so far as to calling herself "Gorilla Fist" in order to present herself as his physical and soul mate. This only served to make Monkey Fist strongly reject her, though she continued to pursue him regardless.[4]

Her first appearance during senior year, inexplicably minus her bio-engineered gorilla limbs, was among a bunch of other villains at a Jack Hench HenchCo seminar advertising one of his company's inventions. Finally she was at Drakken's award ceremony at the United Nations, with the petrified Monkey Fist and seemingly not too happy, then afterward at a café with other villains, conversing with Adrena Lynn.

Amy is an incredibly talented biogeneticist, able to dream up and create freakish hybrids with little effort via devices such as the genetic zipper and genomic sequencer. The former she claimed to have built, but the latter she would have stolen, had Shego not taken it first for Dr. Drakken. This proved to be a wasted effort, as Drakken eventually realized he had no idea how to use it, and ended up manipulating Amy into operating the sequencer for him. It is noteworthy that nearly every creature Amy creates or works on displays loyalty to her, at least in that they seem unwilling to harm her.

At her Mount Middleton lair, Amy had a variety of human- and animal-mixed creatures she adored, such as a rabbit-rhinoceros, a lobster-terrier, a cat-snake, and a "Chicken" and "Hog" men.[1]

Amy has attached herself to several men, sometimes notably against their will. Mr. Barkin was especially conflicted by her forwardness, as he seemed to want to avoid her without actually being rude. His outright rejection of her due to discovering her twisted experiments was one of the few times when Amy was truly angry.[1]

Dr. Drakken hoped to seduce Amy into being his willing accomplice, so he could use her knowledge of biogenetics. His plan worked in that Amy welcomed and responded positively to his advances, but backfired when he actually developed feelings for her, only for Amy to admit that she was in love with Monkey Fist.[2]

Monkey Fist claimed that his relationship Amy was always only a professional one. This is debatable, however, as he at one time owned and seemed especially fond of a framed picture of Amy.[2] What is clear is that he was deeply disturbed by Amy's affections, apparently after she gave herself gorilla limbs in a misguided attempt to become his soulmate.[4] Although Monkey Fist cherishing a picture of her may have been a mental exaggeration on Amy's part.

Amy came to dislike Team Possible for interfering with her. However, due to her overall childish and cheerful outlook, she did not actively wish them serious harm, and so never pursued their demise as most villains did. Amy did, in one questionable instance, drop Team Possible, Yori and Master Sensei into a waterfall which could have lead to their demise. She did not, however, take their equipment beforehand, which was in fact what saved them, although Master Sensei was never in any real danger due to his mystic abilities.

Drakken confesses his feelings for Amy