Start a Wiki
This article is about Ann Possible, the original continuity character. You may be looking for her movie continuity counterpart. 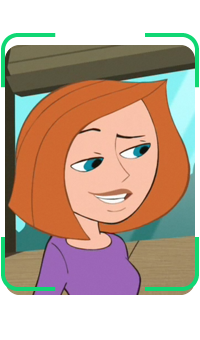 Dr. Ann Possible is a neurosurgeon who lives and works in Middleton. She is a devoted wife and mother.

Ann Possible looks like an older version of her daughter—the only real differences between their looks are that Ann has blue eyes instead of green, her hair is much shorter and a lighter shade of red, and her skin has more of a pinkish color.

Additionally, Ann is taller than her daughter in height, which might be partly due to the fact that she has been shown to wear heeled shoes.

Ann was a nice, but firm person, with a cheerful disposition and understanding attitude.

Like most redheads, Ann has a hair-trigger temper, which Prince Wally almost found out first-hand.[1]

Ann is a graduate of the University Of Upperton.[2]

Ann worked as a skilled neurosurgeon at the Middleton Medical Center.

Ann is an excellent parent who exhibited remarkable adaptability to uncertain situations during her brief forays into heroics alongside her family.[3]

Ann often serves as the voice of reason in her family. She scolds Jim and Tim when they attempt to experiment in the house, offers Kim useful advice on various social challenges, and constantly reminds her husband James to be home in time for dinner.[4] However, in her eagerness to be accepted by her daughter's peers during a Sophomore ski trip weekend, she forgot her boundaries and unintentionally embarrassed Kim.[5]

Ann is apparently well-liked outside of her immediate family as well. Her brother-in-law Slim asked after her fondly when she was unable to visit his ranch with the rest of her family.[6]

Ann is typically welcoming toward any friend or professional contact that Kim might bring home with her. This is especially true of Ron Stoppable, who she treats rather like a third son at times. While she approved of Kim dating Eric, she pointed out that Ron was perfectly acceptable and was concerned about how troubled he was by the new couple.[7] She was quite pleased when Kim and Ron went on their first date.[8]

Ann is on good terms with her co-workers. One of Kim's pet peeves was that Anna would accept personal calls from her while performing surgery and put her on speakerphone, which allowed Ann's coworkers to listen in and comment.[4]

Kim tells her mom 'I'm a cheerleader, we don't do detention'

Ann making the "puppy dog pout" face.
Add a photo to this gallery

Ann is voiced by Jean Smart in all four seasons.

Retrieved from "https://kimpossible.fandom.com/wiki/Ann_Possible?oldid=35963"
Community content is available under CC-BY-SA unless otherwise noted.