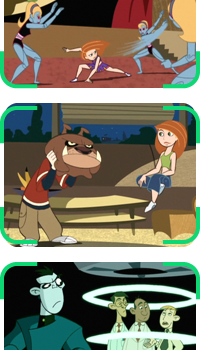 Characters (in order of apperance)

Ron needs to take up an extracurricular activity in order to improve his school report. Much to Kim, and the cheerleaders', horror he decides on cheer-leading. Meanwhile Drakken uses his Bebes to get revenge on some former friends who bruised his pride years ago.

Drakken plans to get revenge against old friends for past embarrassments. But his creations, the Bebe develop a mission of their own - to become perfect beings [1].

After being told that his lack of extra-curricular activities might hamper his chances of getting into a good college, Ron decides that he needs a resume filler, and decides to take up cheer leading. Putting Kim in the difficult position of having to defend Ron in front of the rest of the squad, while trying to find a way of discouraging him before he embarrasses himself, or her. Things don't get much better when Ron announces that he's changed his mind, and doesn't want to be a cheerleader. Largely, because he's set his heart on being the teams mascot. Even going so far as to design and build his own "Middleton Mad Dog" costume.

Feeling bad about not standing up for her friend and his dream, Kim seeks advice from her father. Dr. Possible then tells a story about his college days, and how he lost a good friend whose dream he once laughed at. Unfortunately, Dr. Possible's story doesn't convince Kim and she ends up having a blazing row with Ron. Meanwhile something strange is happening in the local science community. Professor Ramesh, of the Mount Middleton observatory, calls Kim in when his partner, Astronomer Bob Chen has gone missing. Ron refuses to share a ride with Kim and leaves on his own while Kim regrets her cruelty to him.

Kim arrives at the observatory just in time to see Professor Ramesh being abducted by three fembots, who introduce themselves as Bebe before make off with the professor. Angry that the Bebe got away, Kim blames Ron and his belated arrival for distracting her, and chews him out. Hurting his feeling to the point that, when he discovers a link between the two missing scientists and Kim's father, he decides to go it alone. Sometime later, Dr. Possible is getting in his car when, all of a sudden, the Bebes appear. They tear a whole in his car roof and reach in to drag him out.

The first that Kim knows about this is when her father, quite unabducted, storms into cheer practice and demands to know where Ron is, and why there is a hole in his car roof. All soon becomes clear when the scene changes, revealing Dr Possible locked in a cage with the missing scientists. Their captor, none other than Dr. Drakken. It is soon revealed that Professors Ramesh and Chen are the two friends mentioned in Dr Possible's earlier flashback. More than this, though, Dr. Drakken is the one that they laughed at back in college, and now he's back and wanting revenge on them for mocking him all those years ago. Of course, there is one more surprise in store. Dr. Possible isn't Dr. Possible, he's really Ron in disguise. Leaving the Real Dr. Possible to arrive with Kim. With the introductions over, and the Bebes announcing that Drakken is not fit to command them, Kim sets to with the rogue robots but finds that they are too fast and too tough for her Kung Fu skills to be effective against them. Fortunately for her, Dr. Possible comes to the rescue by getting Wade to set the Kimunicator up to emit a wave that interferes with the Bebe's wireless network signal. Severing them from the Bebe's coordinating hive mind, confusing them sufficiently for Kim get them to destroy one another. With Drakken and his robots out of the way, the episode draws to a close with Ron, as the Middleton Mad dog, at a school basketball game. Much to Kim's surprise, and Bonnie's shock, the crowd loves him.

Ron: (puts on the mad dog mask) Mad dog foams at the ma-a-a-a-a-aouth! (foam all over Kim and Bonnie)

Ron: The crowd will eat it up! Taste it, it’s banana cream!

Rufus: Banana! (licks it on Bonnie)

Bonnie: This idea is idiotic! The entire student body will laugh at you!

Bonnie: Not with, at!

Bonnie: Loudly and cruelly they will laugh.

Ron: You don’t deserved to be kissed by a naked mole rat.

(an explosion is heard from the Mt. Middleton Observatory)

Prof. Ramesh: (to the Bebes) Stay back!

Prof. Ramesh: Who... who are you? (the Bebes surround him)

Kim: Is there an echo in here?

(At the Middleton gym hall, the squad is having practice. Mr. Dr. Possible suddenly bursts through the door)

Mr. Dr. Possible: Well, that hole in the roof of my car really grinds my beans!

Kim: I'll be sure that Ron gets the messa… wait a second. He put a hole in your car roof?

Mr. Dr. Possible: He came over to the house, said something about a mission.

Drakken: Gentlemen, don’t flatter yourselves! There’s only one genius in this room, and it is I, Dr Drakken.

Ramesh: Drew Lipsky? Is that you?

Ron: No. (takes off the rubber mask) He’s Dr Drakken, and he’s in for a world of hurt!

(Kim and Mr. Dr. Possible are driving through the streets)

Kim (to Kimmunicator): Wade. Ron is missing. Can you find him?

Wade: Do you think I have him micro-chipped or something?

Ron: Why are you after Kim's dad and his friends, anyway.

Drakken: PAYBACK! FOR YOU SEE… Wait, you mean, Doctor Possible and Kim Possible are related.

Drakken: ENOUGH! I SHALL PROVE IT! WHERE'S THE PHONEBOOK!

Ron: Kim, it was Drakken.

Drakken: Okay, fine. So in Middleton, there's only one Possible family.

Drakken: Yes, but there's no way I could be expected to conclude that my arch nemesis is the daughter of a guy I went to collage with.

Mission outfit.
Add a photo to this gallery

In Mission Outfit with safety helmet, goggles and microphone as he stubbornly cycles up to the mission location, separate from Kim.

In disguise as Mr. Possible.

In Mr. Possible's usual outfit but with no mask.

Introducing the Middleton Mad Dog!
Add a photo to this gallery

Retrieved from "https://kimpossible.fandom.com/wiki/Attack_of_the_Killer_Bebes?oldid=36704"
Community content is available under CC-BY-SA unless otherwise noted.