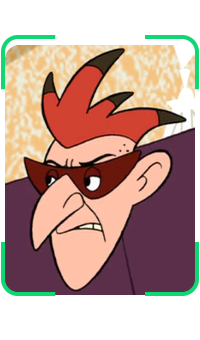 Aviarius, "the Dark Master of the Winged World," is a bird-themed enemy of Team Go with an extensive collection of bird minions and bird-motif gadgets. His secret lair, "the Nest," lies upon the peak of Go Mountain, just outside of Go City.

Aviarius was fueled entirely by his two main obsessions: birds and a desire for power. He himself stated that he wanted the powers of Team Go so that he could rule Go City, take over the world, and get revenge, though against who was never specified.

As Aviarius worked alone, he likely designed his gadgets himself. If nothing else, he appeared to be a fairly skilled bird trainer. Also, though he did not initially appear to be skilled in hand to hand combat, once in possession of Team Go's powers, he wielded them with notable ease and was able to overwhelm both Team Go and Team Possible.

Kim and Ron first encountered Aviarius at the grand opening of Go City's Mucho Grande Bueno Nacho, where he attempted to steal Hego's super strength with a power staff. Kim accidentally fell into the staff's beam, so Hego's power was transferred into her instead. Despite his momentary defeat, Aviarius proceeded to steal Mego's shrinking power, then imprisoned the Wego twins and stole their copy powers. Using the twins as hostages, he lured Team Possible and the rest of the reunited Team Go to his hideout, planning to steal the final two powers and complete the set. Though he succeeded, Ron provided a distraction that allowed Shego to steal the power staff, which was eventually smashed and resulted in the powers returning to their rightful owners. Aviarius was taken into custody by Hego.

Aviarius had a condor as a constant companion, which was trained to fly him to safety or attack enemies on command.

Aviarius was obsessed with possessing the powers of Team Go so that he could use them for evil. He was implied to have long been a recurring threat to them, and even had easy remote access to the viewscreen within Go Tower.

Retrieved from "https://kimpossible.fandom.com/wiki/Aviarius?oldid=34893"
Community content is available under CC-BY-SA unless otherwise noted.