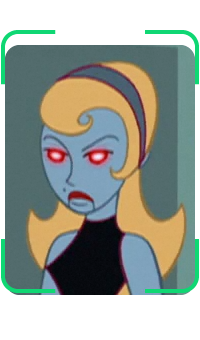 The Bebe robots are Dr. Drakken's attempt to create the perfect woman. However, because of his noted ineptitude at programming artificial intelligence, the Bebes began to think for themselves and deemed his leadership inadequate. They proceeded to devote their considerable skills toward their own goals, and very little was able to stand in their way.

Bebe was created and programmed with one primary goal in mind: to be perfect. Though originally loyal only to Dr. Drakken, the Bebes eventually determined that he was unfit to command them, and began to act on their own.

Bebe was largely emotionless, though Drakken admitted to programming them with a "pinch of human emotion" just so they would be ashamed when they did manage to fail him. Given Drakken's dismal track record with robot programming, that validity of that was questionable. However, the Bebes did seem to think that they required a human to guide them to perfection.

The Bebes were equipped with a host of robotic abilities, including superhuman strength, considerable resistance to injury, and hyper-speed movement. They also demonstrated the capacity to learn from past mistakes and effectively guarded against them in future encounters.

The Bebes were all controlled by a hive mind, and referred to each other by their chronological production numbers, such as Bebe 9. This virtually eliminated any sense of individuality, which allowed them to work together seamlessly.

Drew Lipsky created the first versions of the Bebe robot in college, when he proved unable to get an actual date. After becoming the mad scientist Dr. Drakken, he eventually improved on Bebe's design, made several copies, and tasked them with kidnapping his former friends. However, he had never been good at programming, and the Bebes reasoned that because they were created to be perfect, they should not serve someone imperfect like Drakken.

Because of Kim's claim that Bonnie was "the bossiest person on the planet", the Bebes assumed that Bonnie would make the perfect queen for them, and thus kidnapped her so she could serve as the core of their hive mind. For her part, while this clearly upset Bonnie, she was at the same time flattered by their attention and insistence on her superiority. The Bebes were able to tap into Bonnie's subconscious mind, and treated her desires as commands.

Though the Bebes always claimed that Kim was a "minimal" threat, she was in fact always a considerable obstacle to their plans, and the Bebes treated her accordingly. Though of some this was likely due to Drakken's programming, while under Bonnie's influence the Bebes adopted some of her mannerisms, including her obvious dislike of Kim.

Bebe was voiced by Kerri Kenney.

Retrieved from "https://kimpossible.fandom.com/wiki/Bebe?oldid=36323"
Community content is available under CC-BY-SA unless otherwise noted.