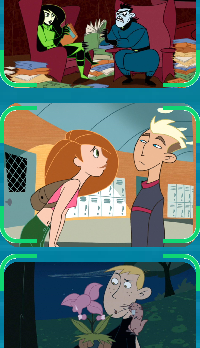 Just in time to complicate Kim's crush on Josh Mankey, Dr. Drakken sprays her with a pollen which will slowly cause her to disappear every time she gets embarrassed. While Ron and Wade are busy obtaining an antidote, Kim tries to have a perfect date with Josh. But avoiding any further embarrassment is a tough task, as Drakken has called in the Embarrassment Ninjas to finish Kim off. Even worse, Jim and Tim's usual attempts at humiliating Kim may do her in first.

Make Kim disappear by being embarrassed into non-existence via the pollen of a rare aurora orchard found only in the Amazon jungle.

Dr. Drakken grows increasingly frustrated by his recent, multiple, swift defeats at Kim Possible's hands, particularly because she easily destroys his inventions and lairs. Drakken decides to put his world domination plans on hold until he has dealt with Kim. He and Shego head to a store to stock up on teen magazines, hoping to learn and exploit Kim's vulnerabilities as a teenager.

At school, Ron complains to Kim about his latest grade on their way to Latin class. Kim excuses herself and takes a longer path so that she can "accidentally" run into Josh Mankey, a boy she has a crush on. Kim makes small talk, clearly hoping that Josh will ask her out. Josh does seem about to ask her, but the bell rings, so they both have to rush to their respective classes.

Drakken and Shego are still searching through teen magazines in their lair. To pass the time, Shego suggests that Drakken take a personality quiz, which he does with great reluctance. This leads Drakken to realize that teenagers constantly worry about being embarrassed, and he decides that this is how they will defeat Kim.

At Bueno Nacho, Kim is upset that Josh was unable to ask her out. Ron considers dating to be overrated. He is also not impressed with Josh, mainly because "Mankey" is only one letter away from "Monkey".

Drakken creates a serum from the pollen of the rare Amazonian Aurora orchid. Upon contact with the skin, it will concentrate the human blush mechanism. Any time the target becomes embarrassed, the serum will manifest the desire to disappear and make it real, eventually erasing them from existence. He and Shego position themselves outside Bueno Nacho, waiting for Kim to emerge. As Kim exits with Ron, Drakken sprays her with the serum, but Kim fails to notice him. She and Ron head to the mall, and Drakken decides to sit back and watch, sure that the mall is an ideal place for teen embarrassment.

Kim spots Josh at the mall talking to Bonnie and some other classmates. She hesitates, unsure if she should approach or flee, and accidentally trips down an escalator, crashing in their midst and accidentally ripping Josh's shirt. As Kim tries to apologize, the serum triggers, and the hole opens up around her belly button. Shocked, Kim quickly covers it and runs, hiding in a nearby dressing room. Kim finds that the hole tries to suck in her finger when she attempts to touch it. Ron follows her, and she shows him the hole.

Back in Kim's room, Ron and Rufus scan Kim with the Kimmunicator so Wade can give them some idea of what happened to her. Wade provides security footage of Drakken spraying Kim, and explains that if things continue, she may vanish entirely, for good. Wade quickly discovers the cause, and says that another dose of the orchid's pollen will negate the effect. Ron volunteers to go to the Amazon with Rufus, but insists that Kim stay at home so that she encounters no further embarrassment. Wade agrees, and Kim reluctantly gives in. She tries to cut herself off from all outside contact by closing her blinds, locking her door, and turning off her computer. Just as she remembers the phone, Josh calls to make sure she is okay. He ends up finally asking her out, and Kim quickly agrees asking him to giver her a few minutes to get changed.

Wade says he will meet Ron at the docks. Ron begins to think he will finally meet Wade in person, but is somewhat let down when he is introduced to the Wade-bot, a robot that Wade controls from his room. They begin their mission to save Kim.

Meanwhile, Kim has changed into a sleeveless blue dress, dark stockings and black sandals as Josh picks up at her house, and they leave for their date. Kim makes sure to grab an overcoat, just in case she vanishes further. Her brothers Jim and Tim decide to spy on the date. Kim and Josh go to a restaurant, unaware that Drakken and Shego are following them, too.

As Ron and the Wade-bot travel downriver in a boat, they run into some rapids that are not on Wade's map. The Wade-bot manages to force them through to calmer waters safely, only to run into a waterfall. The boat goes over, but the Wade-bot carries Ron to safety with a handy hang glider.

Back in the jungle, Ron and the Wade-bot are chased by a panther. The Wade-bot picks them up and rolls off of a cliff to escape, only for Wade to realize that he forgot to pack its parachute.

Kim emerges from the restroom with her overcoat over her dress. Shego sneaks up behind her, trying to plant toilet paper on Kim's shoe. Kim spots Shego and quickly fights her off, then returns to Josh, who suggests that they try a movie next.

Ron and Rufus land safely on a series of large leaves. Rufus then spots the orchid and digs it up. Ron begins to celebrate, only to find that the Wade-bot was damaged beyond repair in the fall. Ron beings to mourn Wade, only to have Wade call in on the Kimmunicator and remind him to get home.

Drakken and Shego follow Kim and Josh to the movies. Drakken introduces Shego to two embarrassment ninjas, experts in the art of humiliation. The ninjas try to drop a balloon filled with syrup onto Kim, but a stray drop alerts her to their presence, so she and Josh move up on row in order to avoid the mess. Kim excuses herself, quickly defeats the ninjas, and returns to her seat. In the back row, Jim and Tim are unimpressed by the ninjas' failed attempt. Outside the movies, the ninjas drive by in a car, splashing Kim with mud. To Kim's horror, her hands vanish.

Ron begins to worry that they will not reach Kim in time, as they are too far from civilization. Just then, a plane flies overhead, and Ron stumbles out of the jungle to find an airport nearby.

As Kim and Josh walk through the park, he tries to hold her hand. Not wanting him to see her invisible hands, Kim quickly pulls away, claiming she does not do that on the first date. Drakken and Shego follow them, as do the ninjas. Josh shows Kim a mural that he and some neighborhood kids painted over a formerly graffiti-covered wall.

Ron rushes back to Kim's room, only to find her gone. He quickly realizes what happened and rushes out to find her.

Jim and Tim set up a film projector and show a clip of Kim taking a bath as a baby. Kim's feet vanish, and so does her dress and overcoat, leaving her as a floating head.

Wade calls Ron and tells him that there is a floating head in Middleton Park. Ron quickly heads there.

Kim finds her brothers and sends them home, only to be confronted by the ninjas again. They begin to fight, and one of the ninjas applies a fake pimple to Kim's forehead, which causes her mouth to vanish. Kim defeats the ninjas, and grabs the cape from one in order to cover herself. She returns to Josh, who tries to kiss her. Ron arrives in time to blow the orchid's pollen onto Kim, which causes her to sneeze and totally re-appear. Josh walks Kim home and kiss her goodnight.

Ron: Hm, frankly I find the whole 'dating' thing to be rather overrated. Who would subject themselves to that?

Kim: Those of us who can actually get dates.

Ron: So he takes you to dinner, you two see a movie. Big tap-dancing whoop! We do that stuff together all the time.

Kim: This is different, Ron. We're talking about a real date with Josh Mankey. I want it to be perfect.

Ron: Have you ever noticed that Mankey is but one vowel away from monkey. You know, I'm not implying anything! It's just something to think about, that's all.

Spacesuit during a mission.

Dressed up for her date with Josh.

But bringing a coat with just in case...

...things happen to not go as planned...

Spacesuit during a mission.

In mission outfit with life vest on.

Mission outfit, looking a bit bedraggled after a long mission to get the rare orchid.

Making awkward conversation at his locker.

Josh, Bonnie and several other Middleton High students look on after Kim's embarrassing tumble down the stairs.

Josh calling Kim to ask her out.

Ready to pick Kim up.

Kim and Josh on their date, admiring a mural he painted in the park.