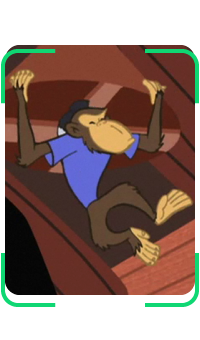 Bobo the Chimpanzee was the animal mascot for Camp Wannaweep, a run-down summer camp located in a forest region somewhere outside of Middleton.

Several years prior to Kim and Ron's sophomore year Bobo shared cabin 13 with a young Ron Stoppable for a summer at Camp Wannaweep. During this time he ran rampage through the cabin, destroying its furnishings and menacing Ron to the extent that Ron developed a pathological fear of Monkeys for years afterwards.

Bobo is presumed to have left Wannaweep after it closed down, as he is not present during the events of either of Ron's returns to Camp Wannaweep[1][2].

His current whereabouts are unknown.

Based on production order, Bobo was initially scheduled to appear as a flashback character in the 3rd episode of Kim Possible (“Monkey Fist Strikes”), where he was to be introduced, and used to explain Ron's fear of Monkeys as a sub-plot relating to the villain Monkey Fist. He was then scheduled to reprise his role in episode 11, Sink or Swim, where his connection to Ron was to be reinforced, and he was to be used to as part of the explanation of why Ron feared returning to Camp Wannaweep.

However, due to differences between the production order and the order in which episodes were aired, Bobo was first introduced to audiences (air date) as a nameless character in episode 2. His connection to Ron was stated, but his ongoing importance to the franchise was not noted as Ron's fear of Monkeys had not yet been introduced. He then returned in episode 13, where he was named. His role as the source of Ron's recurring fear of monkeys was also introduced (along with the fear itself).

Retrieved from "https://kimpossible.fandom.com/wiki/Bobo?oldid=31369"
Community content is available under CC-BY-SA unless otherwise noted.