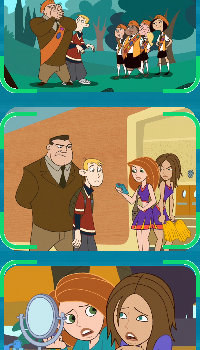 After an unsuccessful mission to stop Professor Dementor, Kim and Ron are struck with a mysterious adhesive and must learn to live life attached to Bonnie and Mr. Barkin respectively and defeat Professor Dementor once more.

Kim and Ron are having problems with Bonnie Rockwaller and Mr. Barkin respectively. On a mission to stop Professor Dementor from stealing something from a top secret research facility, they're unable to stop Dementor from stealing the facility's invention, but Ron, unknowingly, ended up with Dementor's invention called a "Bondo Ball," which can bind people together at points on their bodies.

Once back in Middleton, Ron ends up being bonded to Mr. Barkin at the shoulder while Kim gets bonded to Bonnie at the hip. Until they or Wade can find a solvent that will get them unstuck, Kim and Ron have to deal with being stuck to Bonnie and Barin, respectively. Ron finds out that Mr. Barkin acts as a den mother to a troop of Pixie Scouts in Middleton—or "Brigadier Pixie" as he calls it. Kim discovered that Bonnie's home life was not easy for her when she met Bonnie's got two older sisters named Connie and Lonnie who are just as mean to Bonnie as she typically is to others. After Connie and Lonnie leave after insulting Bonnie, Kim's shown to be feeling uncomfortable and actually kind of sorry for Bonnie.

On a tip from Wade, Kim and Bonnie head for Dementor's Bavarian Alps hideout but are captured by him and his giant mutant Dachshunds. Wade alerts Ron and Mr. Barkin while they were at the Middleton Community Center to tell them what happened to the girls. The Pixie Scouts accompany him and Mr. Barkin on a rescue mission. While the two cheerleaders were hooked up to a machine of Dementor's, Kim apologizes to Bonnie for dragging her into the situation, but Bonnie assures Kim that it was actually kind of fun--Kim also admits that she has a better understanding of why Bonnie acts the way she does.

Ron, Mr. Barkin, and the Pixie Scouts manage to save them—with Kim revealing that she was once a Pixie Scout herself—while Kim and Bonnie use their cheer-leading skills to kept Dementor from escaping.

Back at the Middleton Community Center, everyone's celebrating defeating Professor Dementor and getting separated from each other with a solvent. Ron's made an honorary Pixie Scout and, badly, raps about it, weirding out Bonnie and especially Kim.

Kim: You still think Barkin's out to get you?

Ron: I know, Kim. I looked at him funny once in the ninth grade and he's dogged me ever since!

Ron: That's it all it took. Some people are just born to battle, KP. Like you and Bonnie. It's the circle of life.

Kim: Interesting choice of words... (redirects the torch Rufus is holding to reveal a lion behind Ron)

Mr. Barkin: (to Ron) I knew you were trouble ever since the funny look incident.

Ron: (After math test) Man that was touch and go for a while, but I pulled it off in the end.

Mr. Barkin: You are planning to pursue a non-math intensive field, correct?

Ron: I can taste my spleen.

Ron: (reading off notes given to him by Barkin) Excuse me, ma'am, I was wondering if a lovely young lady such as yourself would be interested in purchasing some delicious Pixie muffins?

Mr. Barkin: I knew this day would come. Just me and the mutant wiener dogs.

Ron: You knew this day would come?

Kim: Least of our worries!

Cheerleading outfit along with schoolbag.

The same outfit, during Bonnie and Brick's date.

Pink winter fleece outfit with goggles and helmet for climbing.