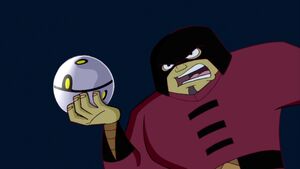 The Bondo Ball is one of Professor Dementor's inventions. It contains a powerful adhesive that could only be undone with his debonding formula.[1]

The Bondo Ball contained a super-strong molecular adhesive. The ball appeared to be triggered by significant impacts, such as dropping it or having it collide with other objects. Once activated, the ball released the adhesive in the form of a yellow-green gas. Anyone exposed to the gas would presumably be bonded to the first body they came in direct contact with.[1]

Dementor with the Bondo Ball

The guards bonded to each other

The unfortunate results
Add a photo to this gallery

Retrieved from "https://kimpossible.fandom.com/wiki/Bondo_Ball?oldid=34813"
Community content is available under CC-BY-SA unless otherwise noted.