View source
This article is about Bonnie Rockwaller, the original continuity character. You may be looking for her movie continuity counterpart. 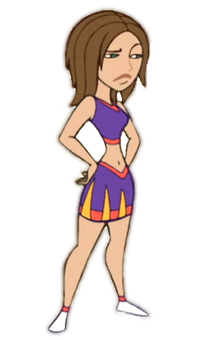 Bonnie is a brunette of average height with shoulder-length hair in a shag cut, teal eyes, a slender but curvaceous figure, and may be around 105-lb as stated by Kim when she and Bonnie were bonded together, due to the effects of an invention by Professor Dementor. However, that could just have been an estimation on Kim's part[1].

Bonnie was generally considered to be a very rude, snobby, self-absorbed girl with a dismissive, cold attitude, and a superiority complex, especially toward Kim, Ron Stoppable, and their friends, whom she largely considered to be beneath her. She was driven by a near-constant need for recognition, and almost always demanded to be the center of attention, no matter what the situation was. Bonnie's self-obsession was such that she could not be bothered to care about the problems of others, even if they were far more important than her own desires.

She was also very aware of Middleton High's social "food chain", and desired more than anything else to climb to the top and stay there. As such, Bonnie devoted much of her time to following the latest trends, obtaining the hottest gossip, ensuring that she was consistently attached to a highly popular boyfriend, remaining on good terms with the most popular Senior students, and putting down anyone she came across that she considered to be on the lower rungs of the social ladder.

Bonnie was long thought to be mean in general, for little reason other than she could. However, while bonded to Kim's hip for a short time, it was strongly implied that Bonnie's sour disposition stemmed largely from her two older sisters, Connie and Lonnie, who were just as verbally abusive to Bonnie as she typically was to others, to the point where Kim was clearly uncomfortable having witnessed the exchange[1].

True to her somewhat spoiled nature, Bonnie hated having to work hard. She would, however, put this aside and devote a tremendous amount of energy into the things she was most passionate about, such as cheerleading. Even Kim, despite her less than stellar relationship with Bonnie, eventually admitted to being impressed by how driven Bonnie was to replace her as the Middleton High cheerleading captain. Bonnie did gain the position, with the surprise help of Kim adding her support. Kim then explained that the hard work was only just beginning, and once Bonnie realized the enormous responsibilities of actually being the squad captain, she had second thoughts[2], and presumably gave the position back to Kim sometime within two weeks or so.

Bonnie was also not above cheating to achieve her goals, such as rigging her senior year Homecoming vote to become Queen, a result which could only enhance her standing on the proverbial "food chain", if not take her to the top[3].

While it is unknown how long she has actually known Kim, she knew her long enough prior to when Kim first tried out for cheerleading in middle school to have given her the nickname "Tin Teeth", due to Kim having braces.

In middle school, Bonnie was one of three judges for cheerleading tryouts. She disliked Kim even then, and assigned her a routine that was supposedly impossible. Kim performed it flawlessly, so Bonnie reluctantly accepted her as a squad member. This was notably one of the few times where Bonnie apparently outranked Kim on the squad, as she also seemed to be in charge of the practices.[4]

It was revealed during her senior year at Homecoming that she has known Ron almost at least as long as Kim knew him, as Bonnie had been calling him cruel names from Kindergarten to 12th-grade. Apparently she stepped up her level of disdain for him as Ron remarked when he was a millionaire that she had been mean and abusive to him since middle school.

Bonnie was very much concerned about the proverbial "food chain" at their high school and angled to keep her position on it by saving seats at lunch for the even more popular senior, Amelia, and by dating Brick Flagg, the then star quarterback of the Middleton High football team as that was considered a status symbol. A tactic which apparently worked as Bonnie was one of the only lower class students seen as able to sit at the senior lunch tables.

Nonetheless, Bonnie felt challenged by Kim's general popularity as well as her being the school cheerleading captain, the latter of which Bonnie coveted and managed to gain before eventually giving it back to Kim. Since then Bonnie was never nearly as vocal about replacing Kim as the captain. However she still angled to have prominent positions in routines; ever ready to step in whenever Kim might miss her mark in a layout, such as taking top of the pyramid at a Cheer Camp demonstration. Otherwise, Bonnie seems to consider it humiliating to be "second fiddle" to anyone for anything.

Bonnie has proven to be a very physically talented individual, with impressive skills in dancing and gymnastics. She appeared to be one of the more experienced members of the Middleton High School cheerleading squad, as she was the only girl ever shown to be capable of consistently replacing Kim in routines[5], or actually replacing Kim as squad captain, however briefly. Bonnie bragged that she had taken twelve "intensive" years of ballet when she signed up for the Middleton High talent show[6].

Bonnie was also shown to be an excellent driver, having been the only one in her driver's education class to actually pass on the first try, and greatly impressed Mr. Barkin in the process[7].

Given the proper motivation, Bonnie could also be very manipulative. She has displayed a particular talent for pushing Kim's buttons, faking sincerity at opportune times, and getting others to do what she wanted through cheating, lying, or making them feel sorry for her.

Mrs. Rockwaller appears to be enthusiastic and kind-hearted, but is shown to be a source of consternation and embarrassment for Bonnie[8].

Nothing is ever mentioned about Bonnie's father.

Connie and Lonnie are Bonnie's only known siblings, who are also possibly fraternal twins, due to a comment Bonnie made when she was signing up for the Middleton High talent show[6]. They enjoy being mean to Bonnie by teasing and belittling her. According to them, Connie "got all the brains", Lonnie "got all the looks", and Bonnie "got the rest"[1].

Bonnie seems to have many friends whom she hangs out with, although her core posse appear to be Tara and Hope, who are usually at her right and left shoulders, respectively. She spends time with seniors, such as saving Amelia seats at lunch or sitting at the senior lunch tables despite being an underclassman, and talking to people about who were "hotties" and "notties" on her cellphone during class. She also once took a shine to Kim's younger brothers, Jim and Tim, apparently for their potential to embarrass their sister in public. However the tweebs were themselves just hanging out with Bonnie to bug Kim, and they apparently did not like Bonnie all that much, as seen when they "repaired" her car but then remotely disassembled it when she blew off their contract.

There are a few times when Kim and Bonnie appear to get along fairly well.

Brick was Bonnie's on-again/off-again boyfriend for her Sophomore and Junior grades until after he graduated and said he could no longer stand her, having dumped her presumably by phone from college[3].

Bonnie and Junior first met and started dating when she tagged along on a mission with Kim and Ron where Junior had seemingly kidnapped a world-renowned computer-technician[3]. It was essentially love at first sight and they remain together for the rest of the series.

After Bonnie was forced to go to summer school in order graduate from high school, Junior cheers her up by saying that he will be there with her in spirit, after saying that his actual self will be lounging by his pool[9].

The rivalry/conflict between Kim and Bonnie was immediately obvious to nearly everyone who saw them together.. While it was unclear exactly what sparked the rivalry, signs pointed to Bonnie having been the instigator, and certainly the first to have been blatantly unpleasant. Kim once even asked, "What makes someone like that?" out of genuine frustration and confusion as to the source of Bonnie's attitude towards her. If nothing else, initially Bonnie did not appear to want Kim on the cheer squad at all[4], and definitely later resented that Kim was the captain instead of her. At other times, Bonnie seemed to want nothing more than to steal the spotlight from Kim, but in many others settled for merely making Kim's life a bit more unpleasant with a negative comment.

Bonnie had at least disliked Kim since middle school, but the feeling did not seem mutual at the time.[4] By their Junior year, however, Bonnie and Kim clearly considered each other unfriendly rivals for the most part: they associated only for the sake of the cheerleading squad when necessary, and other than that generally avoided each other, unless one was attempting to provoke the other. There, as well, Bonnie was usually the first to throw out an insult.

Despite their noted dislike of each other, Bonnie and Kim had much in common, from their arguably equal talent in cheerleading to their widespread popularity in school, although for largely different reasons. Bonnie also had the distinction of being the only member of the cheer squad, other than Ron, Tim, and Jim, to accompany Kim on multiple missions, although she always did so unwillingly.[1][3]

Bonnie was rather cold to Ron. Most of the series, she referred to him as a "loser", even to his face. While Ron was a millionaire she kissed up to him and was part of his posse to reap the benefits of his freely-flowing new found wealth. However after it was gone, she returned to treating him coldly.

During her senior Homecoming, Bonnie rigged the election with the aid of fellow senior Ron Reiger to get herself voted as queen; leaving her to attach herself to Homecoming King, Ron, even kissing him to keep him from explaining what his true feelings were and with whom they lay. Realizing what she was doing and with whom, she broke down and admitted it was all due to being dumped by Brick, and that Ron was just the rebound[3]. 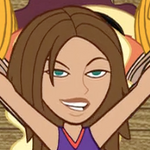 Bonnie in her PJs

Bonnie Rockwaller In Her Pink Bikini

In the future timeline where Shego ruled the world, Bonnie was employed as a teacher at the Attitude Adjustment Center, formerly Middleton High School. Rather fittingly, Bonnie took a certain amount of pleasure in breaking the wills of her charges so they would better perform as Shego's mindless workers. Curiously, she was one of the few people from Kim and Ron's past who did not seem to recognize their past selves at all, despite them looking almost exactly the same as they would have when she had last seen them in high school.[4]

Bonnie is voiced by Kirsten Storms in all four seasons, who is best known for playing Zenon in Disney Channel's Zenon, Girl of the Future series.