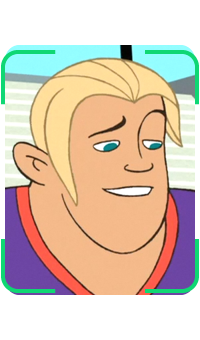 Brick Flagg is a student at Middleton High School during Kim Possible's sophomore and junior years, and the star quarterback of the football team. He was also known for being the on again, off again boyfriend of Bonnie Rockwaller.

Brick is unusual in that while being a stereotypical "dumb jock," he generally avoids being a bully, unlike several of his fellow football players. He is fully aware of his popularity, and as a result largely only dates girls considered to be very popular, such as Amelia, Kim Possible, and Bonnie Rockwaller. Brick is generally slow-witted and somewhat conceited, but ultimately a nice guy. If nothing else, he attempts to treat his girlfriends well, as he knows the pain of being dumped. However, Brick does have a limit as to how much he is willing to tolerate in a relationship. Though he was attracted to Kim, he thought she tried too hard, even though she was truly not interested in him at all.[1] Curiously, Brick dated Bonnie on and off throughout high school, before he finally tired of her meanness shortly after he went to college, and dumped her for good.[2]

Brick is known primarily for his football talent, specifically as the Middleton quarterback.[1] While it is unclear exactly how long he played for Middleton, at the very least he definitely played his last two years, repeated his Senior year once, was in high school for seven or more years[3], and more than likely played football the majority of that time. Though Brick's popularity and praise from his peers would suggest that he was a fairly talented quarterback, Ron Stoppable ultimately broke more school records as a football player than Brick ever did, despite only playing for one year.[3][2]

Bonnie Rockwaller had the distinction of dating Brick longer and more frequently than any other girl, something she took a great deal of pride in only because of his popularity. She firmly believed that every cheerleader should date one of the top jocks, and Brick was her target of choice. That Bonnie was with him primarily for status did not seem to bother Brick on the surface, which suggested that he was either unaware of it, or dating Bonnie for similar reasons. Though there was a mutual attraction between them, Brick still showed interest in other girls at various points during his relationship with Bonnie.[4][5] Following their final break-up, Bonnie held a great deal of resentment toward Brick, especially for damaging her chance at becoming homecoming queen. Brick, however, was more than ready to be done with her and showed no resentment over the decision.[2]

Kim Possible and Brick had no regular contact outside of football games, and other than appreciating his skills as quarterback, she had little interest in him. Brick found Kim attractive, and while he may have been motivated by her status as cheerleading captain, his complete lack of knowledge about her status as a heroine, and indeed, everything else about her, suggested that he was genuinely interested in Kim, and picked her to pursue out of the several popular girls he saw on a regular basis. Still, he was unable to deal with the high pressure situations that came along with Kim's missions, and lost interest in her on his own.[1]

In a possible dystopian future ruled by Shego, adult Brick is bald and fat.

He once thought Kim liked him due to a fraudulent story Ron wrote for the school newspaper[1]. Despite being a stereotypical "dumb jock", Brick managed to avoid being a "school bully" type. In fact, aside from a confrontation he had with Japanese exchange student, Hirotaka[2], Brick typically makes no point in throwing his weight around and is actually a genuinely nice, if slow-witted guy.

During her years at school, Bonnie Rockwaller was his on-again/off-again girlfriend. However it did not seem to be a genuine attachment on his part as at Kim's Junior Prom, after misunderstanding Bonnie's scorching retort, expressed some interest in Monique[3]. After the end of that school year, the latest repeat of his Senior, he finally graduated and managed to get accepted into a college, from which he dumped Bonnie, apparently by Long Distance, implied by phone. When Ron called him to try to convince him to get back together with Bonnie, his response was he had no intentions of resuming a relationship with her, causing Ron to comment that college had actually made Brick much smarter[4].

At the beginning of Kim's senior year, Mr. Barkin stated that, "after seven years, Brick Flagg graduated last June", although it is unclear if seven was the total number of years he was in high school––indicating he was held back for four years––or the number of times he failed to graduate––meaning he was in high school even longer; none of which addresses if he was held back in any of the other grades….

He was also in the same Science class as Kim, Ron, Monique, and partnered with Bonnie[5].


Cite error: <ref> tags exist, but no <references/> tag was found
Retrieved from "https://kimpossible.fandom.com/wiki/Brick_Flagg?oldid=27595"
Community content is available under CC-BY-SA unless otherwise noted.