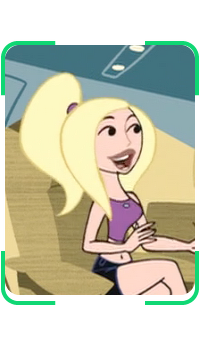 Britina is a highly marketable popstar who has music albums & CDs, her own magazine, and a full-demanded doll line. Team Possible has assisted her a few times.

Despite being a famous singer, Britina was still very down to earth. She admittedly missed out on typical teen experiences, such as school dances, and this may be part of why she was such good friends with Kim Possible, who in turn did not mind sharing details of her own high school troubles.[1]

Britina is an apparently talented singer and/or performer.

Britina gave Team Possible a ride to Tokyo as thanks for saving her Chicago show from a fire backstage. Kim admitted she was scared of approaching Josh Mankey, to which Britina advised her to just go for it. Ron then asked Britina to be his date for a school dance, but she turned him down.[1]

Britina's doll line was endangered when the engine was stolen from the factory production floor by the Bebe robots. A little girl named Midge reported on Kim's website that her local store was out of Britina dolls, alerting Wade to a nation-wide shortage of the dolls. Team Possible intervened and shut the Bebes down for the second time.[2]

Despite her latest successful CD, "Hail Britina", going double-platinum–and therefore not hurting for finances–Britina was falsely accused of stealing cash from a safe of the "Born to Shop" reality show's wrap party. Sent to jail, she contacted Team Possible for help.

Team Possible discovered that Britina's rumored friend, Camille Leon–one of the stars on "Born to Shop"–had been disinherited and was a common factor in a recent string of similar "celeb gone bad" robberies. Jim and Tim Possible eventually exposed Camille as a shape-shifter.[3]

Britina stated she considered Kim and Ron "best friends forever from way back," although she had trouble recalling Ron's name. Likewise, Britina's word was enough for Kim to believe she was innocent, even while visiting her in jail.[3]

Britina and "Oh Boyz" member Nicky Nick had a well-publicized and covered stormy relationship with a few break ups and make ups before eventually breaking up for good.[citation needed]

Britina was one of several celebrities betrayed and framed by Camille Leon, who claimed to be their friend at the time. Oddly enough, though, Camille was not all that decent a friend to anyone in general, even before her criminal activities were discovered.[3]

During her first appearance, Britina wore a purple top that reveals her midriff, black shorts, and black shoes.[1] This outfit may have been the inspiration for her doll line, which used a purple midriff top and a slightly darker shade of purple for the shorts.[2] While in prison, she wore an orange inmate uniform.[3]

Britina is voiced by Tara Strong.