Start a Wiki
This article is about the episode. You may be looking for the restaurant. 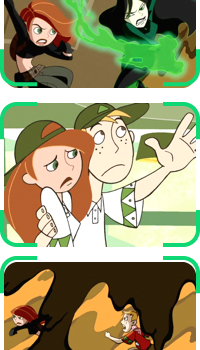 Bueno Nacho was the sixth episode, but second produced, to air of the first season on June 28, 2002. Bueno Nacho is also the name of a Mexican food restaurant franchise in the show. The episode is notable as the first to introduce recurring background character Ned and recurring fictional fast-food item the "Naco".

Dr. Drakken plans to use a stolen laser drill and a magma cannon to melt Wisconsin and rename it Drakkenville.

Kim wants a new jacket from Club Banana, but her parents will not simply buy it for her, and she is broke. So, she gets a job at Bueno Nacho, persuading Ron to work with her so that she can earn the money to buy the jacket.

World-saving teen hero Kim Possible wants to buy a trendy new jacket from the clothing store Club Banana. But she has run short on cash and is forced to get a job at her favorite place to hang out, the Mexican restaurant "Bueno Nacho". Joining her on her missions is her best friend and sidekick, Ron Stoppable. This time around, Dr. Drakken and his sidekick Shego are trying to penetrate the earth's crust to harvest magma, using as a base the interior of a giant cheese wheel in the state of Wisconsin.

Ron, meanwhile, reluctantly joins Kim in her job, and realizes that he has a niche at Bueno Nacho. While Kim is struggling he thrives and is made assistant manager, rendering her his employee. When Kim wants to leave to go fight Drakken, Ron explains that her shift is not over, which prevents her from leaving. When she quits her job, Ron refuses to go with Kim, and she leaves alone.

Upon arriving at the giant cheese wheel without her sidekick, Kim is overpowered and captured by Shego and Drakken's minions. Meanwhile in Middleton, Ron is bossing around Ned, the former assistant manager, when he learns that Kim is in trouble. He immediately leaves to save her but is also captured. Drakken is just about to strike magma when Ron's naked mole rat, Rufus, wakes up. He frees Kim and Ron, allowing the disabling of the "magmachine", a massive spheroid device with a giant cannon.

It is not over yet, though. Drakken had stolen a laser drill to reach the magma, and the magmachine was supposed to handle the magma, ejecting it into the sky similar to a volcanic eruption. Ron sneaks into the laser drill's control room and outlines the situation: "Rufus, this is a precision implement, incredibly complex… better mess with everything", spinning the beam all around and melting the cheese in the cheese wheel as it is pure swiss cheese, not simply a building covered with it. Kim and Ron narrowly escape while Drakken's plan is foiled. Shego and him being stuck in the cheese as Kim and Ron watch. Kim returns home still without money, but Ron, who still has his paycheck, buys her the jacket she wanted. Nevertheless, when Ned walks up wearing the same jacket, Kim and Ron agree to exchange it. 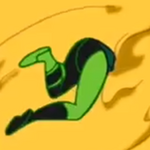 Retrieved from "https://kimpossible.fandom.com/wiki/Bueno_Nacho_(episode)?oldid=35497"
Community content is available under CC-BY-SA unless otherwise noted.