View source
This article is about the restaurant. You may be looking for the episode. 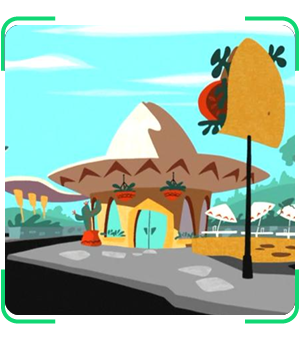 Store #582 serves as a popular hangout spot for Middleton High School students, especially Kim Possible and Ron Stoppable. It features a standard store design, including the signature Sombrero-shaped roof, and is both managed and staffed most frequently by Ned.

Bueno Nacho's menu includes traditional tortilla-based dishes, and commonly seen items are nachos, tacos and burritos. Several menu items were named by combining such dishes: the "chimirito" (chimichanga and burrito), the "quesachanga" (quesadilla and chimichanga), and Ron's personal invention of the "naco" (nachos and taco).

There are also breakfast dishes, such as an egg quesadilla called a "huevadilla" ("Huevo" is the Spanish word for "egg"). The menu also had at least eight combo meals, and the option of "Grande Sizing" meals if larger portions were desired.

Store #582 is a significant location in Kim and Ron's lives. On numerous occasions they were described as practically living there because of how often they hang out there, especially in Ron's case.

Kim and Ron working under Ned. 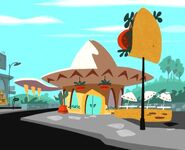