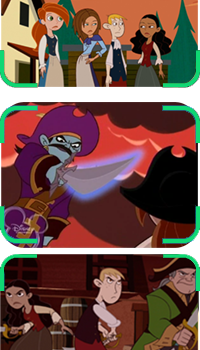 Kim, Ron and the rest of the Middleton High seniors go on a senior-class trip to a historic seaport where Drakken opens a treasure chest and becomes possessed by a pirate's spirit.

Kim and the other seniors go on a trip to historical seaport run by Mr. Barkin's father. There they lose access to all electronics such as cellphones - including the Kimmunicator. They have to work like they did back in the 1700s - making horseshoes, churning butter, and getting eggs. Meanwhile Dr. Drakken becomes possessed by the spirit of the pirate Black-eye Brown after opening a sea-buried treasure chest.

Ron: But, but, but... Got to see how the car chase ends. I can talk during the commercial. Thank you.

Kim: Okay. (She leaves, and sits beside Monique outside.)

Monique: Barkin Senior is regaling us with tales of the town's steamy resolve.

Barkin Senior: Aye, for three hundred years, this community has fought to preserve our way of life. Albeit resisting the mighty hand of modern technology, or fending off the greedy likes of pirates.

Ron all of a sudden shows up and plops himself between Kim and Monique.

Ron: Did someone say pirates?

Kim: I thought that you were watching TV in a jar?

Ron: Eh, It was all reruns.

Barkin Senior: Boo-yah! (embarrassed) You know what I mean.