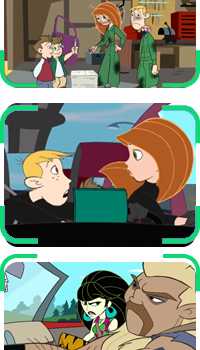 Car Alarm
Broadcast Information
US Broadcast Number:
70
Disney Channel US Premiere:
February 17, 2007
Merchandise
iTunes Releases:
Unknown
Kim finally manages to get her own car: a literal fixer-upper that her dad once owned. However, chaos ensues when the Tweebs volunteer to trick it out. Meanwhile, Shego gets out of prison by way of Motor Ed and assists in his latest caper.

In overalls, prepared to start work on her new car.

In overalls, after a less than productive attempt.

Driving her new car in her mission outfit.
Add a photo to this gallery

All dressed up and ready to...

...make a mess and get nowhere with the car.

Mission outfit in Kim's car.
Add a photo to this gallery

This is the first episode Motor Ed appeared in without Felix.

Retrieved from "https://kimpossible.fandom.com/wiki/Car_Alarm?oldid=36387"
Community content is available under CC-BY-SA unless otherwise noted.