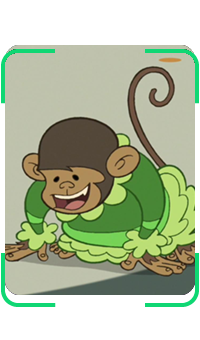 Chippy was the monkey ninja which Ron thought was Kim turned into a monkey.

Chippy is a small monkey. She has brown fur, tin skin, small beady eyes and in has the general appearance of a generic monkey.

Despite being a trained monkey ninja, Chippy displays a certain lack of discipline in that she takes part in excessive snacking during missions, occasionally ignores Monkey Fist's orders, and is fairly curious about things unfamiliar to her. Clearly she has a playful and mischievous streak.

She could also be extremely aggressive around strangers. However, after spending a day with Ron, she relaxed considerably and was much more friendly. Chippy is loyal to and fiercely protective of Ron, even going so far as to attack her former master in order to defend Ron.

Chippy is one of the Monkey Ninjas trained by Monkey Fist, and one of three that accompanied him in an attempt to steal the Monkey King Amulet. Chippy was the only one whose name is revealed, and is chastised by Monkey Fist over the habit of excessive snacking on the job.

The monkey ninjas are sent to kidnap Kim from Middleton High School the next day, but Chippy becomes distracted while searching through Kim's schoolbag and is left behind. Because the amulet had been rapidly turning Kim into a monkey, Ron Stoppable mistakes Chippy for a fully transformed Kim. In a misguided attempt to prove his loyalty to Kim despite her becoming a monkey, Ron does his best to overcome his fear of monkeys and spent the day with Chippy, even taking Chippy to the theater and Bueno Nacho.

Unfortunately for Kim, Ron has Chippy sit for her school picture, wearing a dress made by Nana Possible that Kim refused to be seen in. Wade eventually learns that Chippy is a natural-born monkey thanks to a DNA analysis. Though Ron is initially disgusted that he has spent the day with an actual monkey for no reason, he recognizes that he and Chippy still genuinely like each other.

When Monkey Fist later tries to attack Ron, Chippy startles them both, jumping in to defend Ron, savagely attacking Monkey Fist, and allowing Ron to run away. Monkey Fist eventually escapes the fight by shoving Chippy into a locker. Once Kim is back to normal, she asked Ron about his "little monkey friend," reminding him to go back and free Chippy from the locker.[1]

Chippy is one of the monkey ninjas that work for Monkey Fist.

Chippy and Ron form a friendship while spending time together, when Ron thought that Chippy was Kim.

As a monkey ninja, Chippy wears the standard ninja garb. When Ron thought Chippy was Kim she wore the dress that Nana made for Kim.

Chippy is voice by Frank Welker, who also voices the other Monkey Ninjas[2].

Retrieved from "https://kimpossible.fandom.com/wiki/Chippy?oldid=29923"
Community content is available under CC-BY-SA unless otherwise noted.