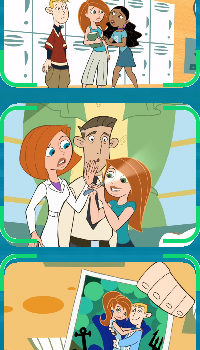 During a fight with Drakken and Shego, Kim gets amnesia and loses all her memories. Ron now takes on the task of getting her back to her usual self. Meanwhile, Drakken comes up with a plan to turn the military into his slaves. It annoys Ron that Kim can remember almost everything except that she and Ron are dating.

The episode opens with Drakken and Shego haven stolen nanotronium, the smallest, most powerful energy source in the world. Drakken's glory is cut short when Kim swings onto the hovercar and snatches the nanotronium away. Ron, meanwhile, is tangled in his grapple line. Shego fights Kim to get the mini energy source back. In the fight, Kim and Shego hit the hovercar's steering levers, causing it's speed to increase. Ron manages to climb aboard and pick up the nanotronium. Rufus then hits the steering levers to cause the hovercar to spin. Kim and Ron jump off while Drakken and Shego continue their dizzying ride. Ron feels proud of himself until he notices he lost his pants again.

At the mall, Kim tells Monique it isn't a big thing that she and Ron have been dating for six months, but Monique (who calls it a half-iversary) thinks different. Kim does have a gift for Ron thought- a belt made by Wade and reinforced with flexible titanium so that Ron's pants would no longer be an issue. Ron arrives and the two are about to go to Kim's mother's hospital to cheer up the kids there. Before leaving, Kim gives Ron the belt. Ron says he doesn't need it, but reconsiders after a passing cart rips away his pants.

Shego comes into the lair to discover Drakken still in his pajamas, looking for a piece of paper on which he wrote a 'foolproof' plan that came to him in his sleep. Drakken can't find the paper and is unable to remember what he was dreaming. On the t.v, a scientist unveils his invention- the M.R.M or Memory Recovery Machine, which can restore anyone's lost memories. Drakken decides to steal the device for himself to remember his plan. To Shego's dismay, he starts using cards to keep track of his ideas.

At the hospital, the kids are happy to see Kim, Ron, and especially Rufus. Meanwhile, Drakken and Shego break into a nearby lab and grab the M.R.M, but before they can leave, they are discovered by the inventor. Rufus is showing off for the kids when they hear an explosion caused by Shego. While Kim fights Shego, Ron tries to grab the M.R.M away from Drakken, but they drop it and the power cell falls out. Drakken then shoves the power cell in backwards. Kim grabs the M.R.M away from Drakken just as it explodes. Drakken and Shego escape while Ron asks Kim if is okay, only she doesn't know her own name. With the power cell in backwards, the M.R.M has given Kim complete amnesia.

At the Possible house, Kim's parents plan to restore Kim's memories while her brothers take advantage of her loss of memory by dressing her funny, much to her parents displeasure. Kim's father shows her a video containing compressed version of Kim's life as well as clips from Kim's least favorite show, Captain Constellation.

With Kim's memories of crimefighting gone, Shego takes advantage of the situation and begins a series of heist. She returns to the lair to discover Drakken sleeping. Slamming the door, Shego wakes Drakken up. Drakken has recalled the plan from his dream and has written what he remembers down on a card. Shego finds the information on the card baffling: sandwiches, trains, mind-control, and green men.

Ron arrives at the Possible house the next morning to pick up Kim, who has recovered most of her basic memory. To Ron's dismay, Kim doesn't remember they are dating. Ron tries to prove to Kim he's her boyfriend by giving her a bouquet of flowers, but she mistakens it for a salad.

At school, Ron gives Kim a tour of the school and the run into Monique. Ron tells Monique Kim's making progress, but she still doesn't recall relationships she has. To Ron's surprise (and displeasure), Kim instant remembers meeting Monique.

Shego comes back to the lair from her latest heist and finds Drakken in his lab, concentrating his leftover brainwashing shampoo into a mind-control serum for the final phase of his plan. Despite Drakken saying the plan is foolproof, Shego thinks it's anything but.

Ron takes Kim to Bueno Nacho, where she recalls everything there. Ron is upset that is Kim remembering everything except the fact that they are dating. Ron shows Kim a photo of them on their first date (at the prom). Kim then recalls when Ron called her about his dream where they where at the dance and Kim melted. She then believes that Ron was dreaming that they were dating. Ron attempts to correct Kim when her watch starts beeping. When Kim asks why it was doing that, Ron reintroduces her to Wade, who tells them about Shego's crime spree. Kim suggests they call the proper authorities, but Ron grabs her wrist and explains about Kim's crimefighting on their way.

Kim and Ron arrive at the store Shego just robbed. Despite her remembering Shego, Kim doesn't recall how to fight her, so when Shego attacks, Ron intervenes. While Ron dodges Shego's attacks, Kim signs an autograph for one of her fans.

Back at school, Wade gets Shocked & Horrified Ron had to battle Shego alone. Wade has Kim participate in cheer practice to help her remember her fighting skills. Ron tells Kim to ignore Bonnie's remarks and she'll be find. Kim does pretty sloppy at first, causing Bonnie to comment that she knew this would happen when she started dating "Nacoboy". Ron claims that he is Nacoboy, but Kim remembers what Ron told her and ignores Bonnie, frustrating Ron. Determined to show Bonnie, Kim recalls her cheerleading skills and does the routine perfectly.

In the mountains, Drakken and Shego are watching a passing train. Thanks to an emergency caused by Drakken, everyone on board jumps out. On the train, they discover thousands of sandwiches for hungry soldiers. Drakken plans to add his mind-control serum to the sandwiches, allowing him to control the entire military. Before Drakken can add the serum, Kim and Ron appear. Kim recalls everything except one little detail Ron has tried everything to restore. Due to Drakken's foolishness, the train will explode. Shego abandons Drakken. Kim tells Ron to fix the engine while she deals with Drakken. Drakken changes his plan, insteading of using it on the sandwiches, he'll use it on Kim.

In the engine room, Ron and Rufus try effortlessly to fix the bypass, but no luck. On top of the train, Kim takes the mind-control serum from Drakken and ducks as the train goes into a tunnel, causing Drakken to fall off. Kim heads into the engine room to shutdown the engine, but is blocked when the steam vent busts. Kim tells Ron to close the vent. Ron throws his new belt over the pipe. The flexible titanium allows him to squeeze the vent shut. With her way clear, Kim is able to shutdown the train. Without his belt, Ron's pants instantly fall off. Seeing this, Kim recalls all the times that Ron has lost his pants. Strangely, this allows her to recall her final missing memory- she loves Ron Stoppable. As his girlfriend hugs him. Ron says "Now THIS is a memory". Elsewhere, Shego is hunched over Drakken with a card of her own: "Dr. D fails".

Ending Credits: Kim and Ron are watching Captain Constellation while Kim wonders why she knows every episode, yet she hates the show, not knowing her father had her watch three compressed seasons while her memory was returning.

Kim eventually remembers everything, except that she and Ron are a couple who are dating each other. Absolutely nothing convinces her of that fact, until he loses his pants for the third time, triggering her full memory.

Русский
Community content is available under CC-BY-SA unless otherwise noted.