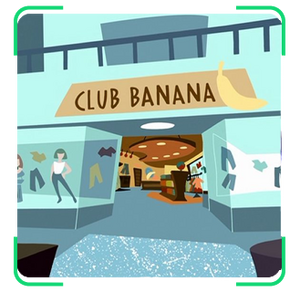 Club Banana is a trendy, up-market clothing store which is Kim's favorite place to shop.

Club Banana is one of the store's in Middleton Mall.

Among Kim and her female peers, Club Banana is considered the trendiest place to shop for clothes. However, it is a seldom mentioned fact that both Club Banana and the popular bargain store, Smarty Mart, were owned by the same company. Most of the clothes that are sold in both stores are pretty similar to each other—in fact there were only a few key differences between the two stores:

Since Martin Smarty founded Smarty Mart and still owns the chain, it can be reasonable to assume that he also owns Club Banana.

Kim and her best girlfriend, Monique, meet at Club Banana and are frequent shoppers there, which entitled them to exclusive benefits, such as attending a preview of the Cleopatra's Closet exhibit at the Middleton Art Museum. Kim is also a charter member of the Club Banana Club.[2]

Monique works part-time at Club Banana, eventually being promoted to assistant manager[3], and is the one who helps Kim get her job at Club Banana[4].