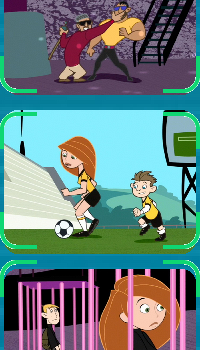 Kim coaches Jim and Tim's soccer team, but her "Kimness" makes it too much for the kids to handle.

After Dr. James Possible breaks his leg, Kim takes over coaching his soccer team, and drives the twins and the other players insane when her ultra-competitiveness pushes everybody to the breaking point. In between practice, she and Ron try to recover state of the art animatronic animals and a neon-style gas from the thieving Seniors, one of which is coming up with his own evil scheme for the very first time.

(When Kim enters the Pizza Partytorium)
Kim: Ron? What are you doing here?
Ron: I come for the games, but I stay for the burnt pizza smell.

Ron: Have you ever seen me shimmy? It's not pretty.

Ron: Kim, the team wanted me to talk to you about your... coaching technique.
Kim: What about my coaching technique?
Ron: Too much technique, not enough coach.
Kim: What's that supposed to mean?
Ron: They just want to have fun, Kim.
Kim: Winning is fun, Ron!
Ron: See, that's your Kimness talking!
Kim: Well, I am Kim?
Ron: It's just a game with small children... who cry when they see you coming!

Ron: Ah! Soccer. Or, as the English call it, football.