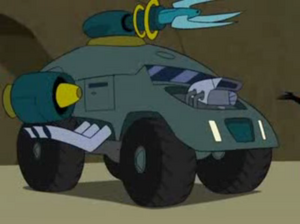 The Doomvee is the "ultimate off-road destruction vehicle", dreamed up by Dr. Drakken, and put together with considerable assistance from Motor Ed, and some stolen contributions from Felix Renton's mother.

The final version of the Doomvee was equipped with a large laser cannon and cyber-robotic arms. It was also capable of booster-enabled flight.

Dr. Drakken designed the Doomvee, but could not get the engine to run. Motor Ed greatly improved the vehicle's performance but mentioned that Felix Renton's cyber-robotic wheelchair was better still. They decided to steal the wheelchair and adapt its technology into the Doomvee, which resulted in the more advanced Doomvee 2.0. However, the similarity to Felix's wheelchair allowed Team Possible to hack into the Doomvee's control system and wreck it.

Retrieved from "https://kimpossible.fandom.com/wiki/Doomvee?oldid=35581"
Community content is available under CC-BY-SA unless otherwise noted.