Start a Wiki
This article is about Dr. Drakken, the original continuity character. You may be looking for his movie continuity counterpart. 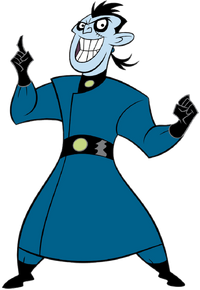 Drew Theodore P. Lipsky, a.k.a. Dr. Drakken, was considered by Kim Possible as her arch-nemesis. A self-proclaimed mad scientist, Drakken dreamed of world domination, but was constantly thwarted by the efforts of Team Possible. Voiced by John DiMaggio, he is the primary antagonist of the series.

Drakken is of average height and build with light-blue skin, long black hair tied in a ponytail, a scar under his left eye, and a thick unibrow.

The reason for Drakken's blue-toned skin is never revealed. Although, from the beginning of a conversation between Drakken and Professor Dementor it is known that it happened on a Tuesday.[1] Shego once teased that his five-year winning streak at pie-eating contests had caused some blueberry "schmutz" to turn his skin blue.[2] It is also known that his skin coloration is somehow tied to his evil, as, when it was removed by the Attitudinator, his skin color returned to a natural color after a gradual process, and, when transferred to Ron, it turned Ron blue until it was removed from him, restoring him to normal, and returned to Drakken, making him blue once again.[3]

Drakken's primary outfit is a blue double-breasted coat and trousers, with black gloves and boots. He also wears a wide belt and a black collar, both of which are embossed with pale green circles.

Drakken was a self-categorized "evil megalomaniac" who was fueled by pettiness and jealousy. He was constantly boastful about his plans, frequently ranted about his successes while they lasted to whatever audience was available, which was usually Shego. He became irritated whenever someone reminded him how Professor Dementor enjoyed a more impressive reputation as a villainous mad scientist.

He had a very threatening bearing until after the incident where he placed a mind-control chip on Shego; upon her being freed of it, she unleashed her anger upon him. What she did to him fully is unknown, but after that Drakken was never the same, being quite fearful of Shego's temper and wrath, often quailing from the prospects of upsetting her. When confronted with a serious and irate Ron at the climax of the "Little Diablos" incident, his bravado quickly fled and he complied with Ron's demand to address him by name while cowering in the rain.

After the Lorwardian global invasion, Drakken and Shego appear to have given up villainy while being hailed for their part in helping to save Earth. It is unknown if they ever returned to a life of evil or not.

Drew Lipsky attended university with Kim's father, Bob Chen and Ramesh. On the night of the science department mixer, he promised his friends to set them up with dates. However, he arrived a half hour late, and instead of bringing dates he presented his Bebe prototype to them. For days, the three laughed long and loud at Drew's embarrassing turnout, eventually leaving him to drop out of school. Apparently after leaving school he embarked upon the beginning of his life of crime, shedding his name and eventually becoming the mad scientist "Dr. Drakken".

During a dream somehow shared by Kim and Ron, it was seen that the inspiration to choose a lifestyle of the evil persuasion presented itself much earlier. As a boy, he had listened to a wax recording he found in his mother's attic of his great-great-grandfather, Bartholomew Lipsky, talking about one of his plans. It was a brief clip which he did not fully understand, but nevertheless it led young Drakken to begin constructing destructive mechanisms and torturous devices, and planted the seeds for the malevolently inclined disposition he enjoyed as an adult.

During Drakken's incarceration after the "Diablos", many times he thought someone would be in the process of breaking him out of prison, only to find out it was only Shego being liberated, until in the arrival of the alien Warmonga who was in search of 'The Great Blue'.

Drakken is a brilliant, yet often bumbling scientist, capable of creating marvelous devices and inventions. However, those which Team Possible did not destroy had a tendency to fail on their own, or be otherwise obliterated by a glitch in one of his faulty and less than fully thought out plans. Drakken repeatedly proved to be especially bad at programming artificial intelligences, which almost always resulted in his robots either turning on him or misbehaving.[4][5] However, it should be noted that this seemed to be the only area of robotics where he had obvious difficulty.

Despite his ability to innovate all on his own, Drakken had no qualms about stealing other people's scientific discoveries to use for evil[6], referring to it as "outsourcing"[7]. He was also talented at incorporating stolen technology into his own creations, even when the technology in question was far beyond his own ability to create.[8][9]

Drakken is a decent planner and on a few occasions he came close to accomplishing his goal of world conquest. It was only interference from Team Possible and one or two minor mistakes he made which foiled his plans.

Earlier in his career, Drakken demonstrated a surprising lack at piloting his own hovercraft, being incapable of properly operating it even when faced with threat of his own exploding nano-tick.[6] He has been seen SCUBA diving and able to hack computer locks.[10]

Just prior to the Lorwardian attack[11], Drakken accidentally mutated himself, causing yellow daffodil-like petals to grow around his neck as well as a prehensile and semi-autonomous vine. This plant vine is extremely strong, as it was able to destroy Warhok's laser cannon at Drakken's command. Drakken is also able to control other plants created by his plant potion, which helped to defeat the alien war machines, thus saving the world.

Shego, typically referred to as Drakken's evil sidekick, was the main reason he was ever even partially successful at his evil plots. She filled various roles while in his employ, serving as his bodyguard, field commander, driver/pilot, or even offering a second, valid, but generally unwanted opinion on his plans. Drakken depended heavily on Shego, as she was one of the few people that could consistently either stall or outright defeat Kim Possible with little or no help. As a result, whenever Shego was not available, Drakken rarely put plans into motion, because they were usually doomed without her contributions, and she was extremely difficult to replace. Furthermore, Shego's contract with Drakken included a "no cloning" clause, so he was not allowed to clone her no matter how much he clearly wanted to.

He employed a staff of henchmen as general-purpose minions and lackeys. Initially competent and well-toned, over time as a whole they became more and more inept and bumbling, especially when compared to Professor Dementor's henchmen, who performed with stereotypical Prussian efficiency. Their lack of motivation may have been based on the fact that Drakken's plans consistently failed, and he did not actually pay them, but instead "rewarded" them with group outings such as bowling and karaoke nights. The henchmen did briefly improve their performance when Drakken implemented the suggested business style of Hank Perkins, but then Ron made them all paranoid about their chances of survival, and they immediately retired.[27]

Drakken kept his mother, Mrs. Lipsky, in the dark about his true activities, allowing her to believe that he was a radio talk show host. Although he genuinely seemed to adore her, he was an inattentive son at best, generally forgetting about her entirely until she barged her way back into his life and demanded his attention. If nothing else, Drakken cared enough about his mother enough that he did not want her to be disappointed in him, and went to great lengths to keep her happy while she was in his presence.

Drakken's only other confirmed relative was his cousin Eddie Lipsky, a.k.a. Motor Ed. The two generally treated each other as siblings, and while they did get along fairly well, they also bickered over petty things and generally needed a third party to interrupt them at such times.

There is a possibility Drew's great-great-grandfather may have been a man named Bartholomew Lipsky, who, like Drakken, was a villain. However, as this was primarily in a dream had by Kim and shared with at least Ron, it is unknown whether Bartholomew was a real person or simply a figment of the imagination.[28]

Drakken has also partnered with Duff Killigan and Monkey Fist, the geneticist DNAmy—with whom he was briefly infatuated—his cousin Motor Ed, and the evil temp Hank Perkins.

Kim Possible is Drakken's primary nemesis, routinely putting a stop to his plans and frequently capturing him and sending him to jail.

Drakken is also none too fond of Ron Stoppable, often forgetting his name. Whether this is because he really can not remember it or whether it is simply an act to annoy Ron is debatable, as while he has openly admitted he simply does not care enough to remember Ron's name, he was once forced by Ron to say it aloud and has said his name without being forced.[19][29][21] This could also be retribution, set out to annoy Ron, because within seconds of telling his name of Dr. Drakken to Kim and Ron after meeting them for the very first time[6], they almost immediately forgot what his name was.

Once an old college friend of Drakken, Dr. James Possible and his friends caused the beginning of Drakken's fall to darkness when they laughed at him and his Bebe project incessently back in college, eventually causing him to drop out. Drakken's loathing of the man only increased when he discovered that James was the father of his teenage nemesis Kim Possible.[4]

Drakken's enmity with Kim and James eventually expanded to include nearly the entire Possible family, most of whom eventually had a hand in defeating him.[22][18][10][26] Furthermore, even when captured by Drakken, every Possible he meets insists on talking back to him and treating him as if he were a non-threat, which never failed to irritate him.[26][21]

Professor Dementor is Drakken's rival as an evil scientist, as he is the more successful one as well as the most infamous, inducing great envy and hatred in Drakken. This causes the two to feud openly.

He was on bad terms with Frugal Lucre for some months. While the two of them were in prison together between the events of So the Drama and "Mad Dogs and Aliens", Lucre's incessant yammering got on Drakken's nerves; if anything, Lucre's hero-worship of Drakken made him even more irritating.

He has a pet poodle named Commodore Puddles, a bad-tempered creature described as "so little… and yet so evil" by one of the henchmen.

Duff and Drakken fight
Add a photo to this gallery

Drakken is voiced by John DiMaggio who is famous for voicing the robot, Bender, in the animated sci-fi sitcom Futurama and Jake in Adventure Time.

Retrieved from "https://kimpossible.fandom.com/wiki/Dr._Drakken?oldid=35986"
Community content is available under CC-BY-SA unless otherwise noted.