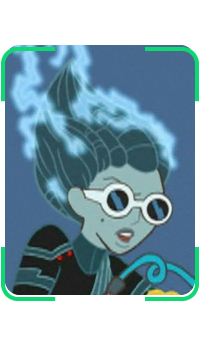 Electronique is an electronics-themed super villain, scientist, and nemesis of Team Go.

Electronique possesses a very bad temper, which was often triggered by Team Go's constant bickering concerning things she believed to be pointless, such as similes and metaphors.

Electronique is very vengeful and will not let anything stand in her way when seeking it out such as Ron, while evil, when he tried to snatch the Attitudinator to attempt to turn Kim evil.

Originally imprisoned by Team Go, Electronique makes her debut in "Stop Team Go" where it is revealed that she had escaped from prison. After gaining her freedom, Electronique sought vengeance against Team Go for her imprisonment.

Luring all of Team Go into a trap, Electronique used the Attitudinator (now modified and known as Reverse Polarizer) to change Team Go from good to evil. Unbeknownst to her, Shego had already turned evil and thus she was turned good instead. With the majority of Team Go's members at her disposal, Electronique plotted to terrorize Go City and bring it to its knees by using the very superpowers that had previously kept it safe. Despite the Reverse Polarizer's effect, Team Go still bickered like they used to, forcing Electronique to send them to find Shego (the one who had kept them in line and on track before they had disbanded) so she could turn her evil.

However, Shego came to them along with Kim Possible, Ron Stoppable and Rufus after seeing what her brothers were being forced to do for Electronique. She was eventually defeated by Team Go, who had all become good, with assistance from Ron, who had temporarily resumed his evil persona. As Electronique was being escorted by Team Go back to prison, spewing out threats of her return, Ron used the Reverse Polarizer on Electronique, turning her good and ensuring that she would never be a nuisance to Go City ever again.[1].

Electronique competency made her roughly the most dangerous of the Go City villains.

Electronique used the power of electricity for her own nefarious purposes. Most notably, according to Shego, she was an electronics genius, in that she was able to weaponize any electronic device, or drastically improve any weapon.

Electronique's suit, powered by a battery or generator on her leg, allowed her to project electrical blasts from her hands.

Electronique modified the Hench Co. Attitudinator into what she called the Reverse Polarizer.

Electronique was voiced by Kari Wahlgren.

Retrieved from "https://kimpossible.fandom.com/wiki/Electronique?oldid=36363"
Community content is available under CC-BY-SA unless otherwise noted.