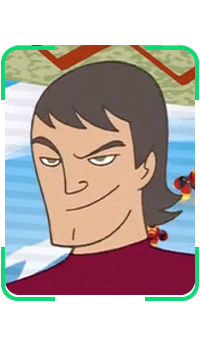 Synthodrone #901, also known as "Eric", was an advanced version of one of Dr. Drakken's synthodrones programmed to distract Kim Possible from his Little Diablo world conquest plan.

Eric was designed to appear as a handsome teenager with brown hair, brown eyes, and a very athletic build.

Unlike most synthodrones which were emotionless, Eric was designed to act as an infiltrator. To this effect he was the subject of Drakken's synthodrone personality and performance upgrades and was programmed to mimic a human near perfectly. In particular, he was programmed to woo and distract Kim from Drakken's plans.

Like most synthodrones, Eric was strong and resilient, tough enough to survive having Kim leap off his face and Ron performing a backflip kick that twisted his head backward, two blows that would have been fatal to a regular human. However, like other synthodrones he was highly vulnerable to piercing blows, a simple hole large enough to spill internal "syntho-goo" being his largest weakness and all which was required to destroy him.

Eric was designed, in Drakken's words as a "made-to-order syntho-hottie", because of this it was able to win Kim's affection with stunning swiftness.

In addition to his standard synthodrone abilities, Eric also has the ability to apply a large electric shock to someone that he is in physical contact with. This ability seems to function similar to a taser, but is capable of actually rendering its target unconscious.[1]

Eric was designed and tasked with keeping Kim focused on him and the Prom during Dr. Drakken's plan to use the Little Diablos to take over the world.

Posing as a new student to Middleton High School it managed to keep her from recognizing Drakken's plot until Ron brought it to her attention and Wade verified it.

Because of this, Drakken arranged for Eric to be "kidnapped" by Shego so he could use it one more time against Kim. Thanks to the relationship between the two, Drakken was able to lure Kim into his trap. After Kim defeated Shego, Eric pretended to have escaped only to knock Kim out with an electric taser built into him when she rushed to hug him, capturing her. Thus revealing his true allegiance.

Eric was present for Kim and Ron's escape and entrance into the control room. In the ensuing battle, he dueled Ron, gaining a reliable upper hand against him. However, he was destroyed in the battle's climax when Rufus bit a hole into his leg, dropping the Electromagnetic Scrambler charge which Kim had fired at Drakken's control tower, where it discharged.

What remained of Eric was presumably destroyed when the tower collapsed just a short time later.[1]

Dr. Drakken is Eric's creator, and while talking to the James and Ann Possible he refers to Drakken as his father.

Eric was programmed to feign romantic interest in Kim.

As one of Dr. Drakken's creations, his enemies are the same as Drakken. In particular Eric was programmed to act as an infiltrator into Team Possible's life, Kim's in particular.

Eric's disparaging remarks about naked mole rats made him a particular enemy of Rufus who killed Eric in retaliation.[1]

There were several hints that Eric was working for Dr. Drakken. He was shown to have impressive reflexes despite not being an athlete like Kim, drove a street bike that was similar to color to that of a synthodrone, "believed" that it was ridiculous that Dr. Drakken was plotting something evil, drove Kim and Ron apart as well as distracting the former from Dr. Drakken's plot, and Dr. Drakken sent Shego to capture Eric despite Kim never telling Dr. Drakken about her boyfriend.

Eric was voiced by Ricky Ullman.

Retrieved from "https://kimpossible.fandom.com/wiki/Eric?oldid=36353"
Community content is available under CC-BY-SA unless otherwise noted.