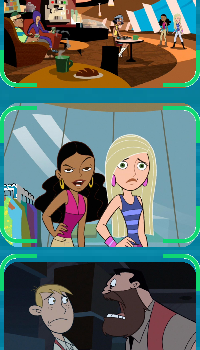 A trio of fashion-obsessed criminals, the Fashionistas, seek to make off with Club Banana's newest fashion designs. Having allied with them to assist with their plan, Camille Leon also takes the opportunity to get revenge on Kim by framing her for the theft. With Ron currently putting up with Mr. Barkin, who also works at Smarty Mart, her last hope lies in Monique.

Mr. Barkin: Stoppable, quit your whining and give me a hand with our base camp. (handing Ron a high heel shoe) Here, use this trenching shovel to start our herb garden.

Ron: Herb garden? Don't you need herbs for that, and a garden?

Mr. Barkin: We'll harvest the soil from our socks.

Ron: Uh, Mr. Barkin, you feeling okay? The crate's not getting to you, is it?

Mr. Barkin: (freaking out) Of course not. (calmly) And why do you keep calling me that?

Monique: Two Kims? Which one is real?

Ron: (pointing at Camille Léon) that one. I may not know where we are or what's going on, but I know my own girlfriend.

Retrieved from "https://kimpossible.fandom.com/wiki/Fashion_Victim?oldid=35335"
Community content is available under CC-BY-SA unless otherwise noted.