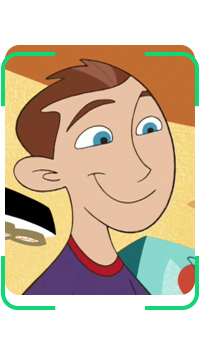 Felix Renton is a student at Middleton High School who is friends with Ron and Kim.

More Ron's friend than Kim's, Felix was an easygoing boy who enjoyed video games and basketball. The fact that he was paralyzed did not stop him from enjoying life. Felix often joked about his situation, much to Kim's discomfort early on.[1]

Felix was very intelligent, and was best known for his quick thinking in a crises, as well as handling his wheelchair's cyber-robotics with ease. Though seemingly a normal wheelchair at most times, Felix could instantly take to the air with it, or defend himself by deploying a pair of robot arms.[1]

Shortly after he moved to town, Felix met Kim Possible and Ron Stoppable at the Middleton Fair. Felix and Ron bonded quickly due to a shared love of the Zombie Mayhem video game series. Kim, however, was too busy attempting to be sensitive to Felix's wheelchair-bound status to be much fun. Their fair visit was interrupted by Motor Ed, who stole several vehicles from a monster truck show. Kim tried to stop him, but failed largely because she was distracted by Ron, who had invited Felix on the mission. Felix proved himself an asset in planning a scheme to lure out Motor Ed with a fake car part. When Ron got taken in its place, Felix helped Kim rescue him and capture Motor Ed.[1]

While Felix, Ron, and Kim were attending a video game marathon event, Felix's wheelchair was stolen by Dr. Drakken, Motor Ed, and Shego. Felix accompanied Kim and Ron to recover his wheelchair, only to find that the villains had adapted his mother's technology from the wheelchair into Drakken's Doomvee. Wade helped them find a control frequency to override the Doomvee's steering and wreck it.[2]

Felix was the class valedictorian at Middleton High School's graduation[3].

Felix's mother was a genius in the field of advanced cyber-robotics. After they moved to Middleton, she took a job in the Robotics division of the Space Center. She modified his wheelchair with her technology, and also used it in their home.[1]

Ron and Felix became fast friends and shared several interests. Unlike Kim, Ron was able to immediately treat Felix like any other friend. In fact, Ron occasionally felt that Felix's wheelchair gave him an unfair advantage at certain activities. He and Felix were comfortable enough with each other where they would regularly joke about Felix's wheelchair.[1]

When Felix first arrived, Kim was in a way even more paralyzed than him, since she kept trying to think of the most "appropriate" way to behave around him. As a result, she tended to say the worst possible things to him, though according to Ron, Felix just thought she was funny. Inspired by Ron's mellow attitude however, and especially discovering that Felix was more than capable of handling life from a wheelchair, even in mission situations, Kim eventually relaxed around him.[1]

When Felix graduated from Middleton High School, he was dating an ex-girlfriend of Ron's, Zita Flores[3].

Felix has twice assisted Team Possible in missions, and proved essential to their success, his wheelchair's abilities coming in handy both times. Since both missions involved Motor Ed, the argument could be made that Motor Ed and Felix have become personal enemies to each other. If nothing else, Motor Ed was deeply impressed by the technology in Felix's wheelchair, and thought it was the only reason Kim defeated him the first time. This is what convinced him to steal both the chair from Felix and the technology added by Felix's mother[2], something Felix could have easily taken personally.

Felix is voiced by Jason Marsden, who in real life is a close friend of Ron's voice actor Will Friedle.

Retrieved from "https://kimpossible.fandom.com/wiki/Felix_Renton?oldid=25095"
Community content is available under CC-BY-SA unless otherwise noted.