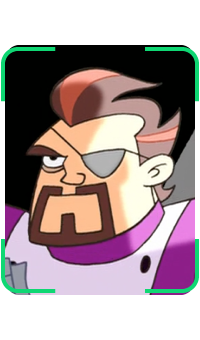 Gemini, aka Sheldon Director, is the leader of the Worldwide Evil Empire, or WEE. He is also the evil fraternal twin brother of Betty Director, the head of the Global Justice Network.

Gemini has brown eyes with dark auburn hair with copper highlights one of his hands is replaced with a missile shooting robotic type of hand replacement. He has a very strong hand grip. He wears this purple and white type of jumpsuit like clothing.

Gemini seemed to pride himself on being his twin sister's "dark reflection, her evil opposite in every way", and was obsessed with proving himself the superior sibling. Still, as the rivalry were based on feelings from childhood, when it came down to between him and his sister, things tend to quickly degenerate into name-calling, explosive fistfights, and threats to call their mother. Further, Gemini's true motivation seemed to be little more than taking things that his sister already had in a constant game of one-upmanship.

Though he rarely entered the field himself, Gemini was a more than capable combatant, much like his sister. Super strong, stronger than most men, is able to crush things in his powerful grip and shoot projectiles from his robotic hand has good battle skills.

Sheldon Director is the fraternal twin brother of Betty Director, being born four minutes prior. That she never gave him the respect as the older twin which he felt he deserved has been the foundation for their heated rivalry which has lasted well into adulthood.

Gemini had a longstanding sibling rivalry with his younger sister Betty. He felt she never acknowledged or respected him as the older sibling, and she claimed that he always wanted what was hers.

The nature of his relationship with his mother was unknown, although he did threaten to tattle on Betty to her, which at least implied that they were on speaking terms.

Gemini had an especially close relationship with his regularly irritated but loyal chihuahua, Pepe. Pepe's hatred of the Global Justice Network was so great that he would bark nonstop upon even hearing the phrase "Global Justice" uttered, at least until Gemini comforted him.

Gemini's Worldwide Evil agents, while largely efficient, lived in near-constant fear of his wrath should they fail him. He had a habit of luring disappointing subordinates into seats that abruptly dropped them out of sight to unknown locations, very similar to the way that the Global Justice Network transported its agents to their underground base.

He has no love interests.

Gemini considered the entire Global Justice Network his enemy, though his behavior seemed to suggest that his true hatred was solely for his sister Betty, and that his efforts to thwart Global Justice were more to irritate her than anything else. Equally possible is that he may have claimed to hate her organization merely as a way of justifying all the effort and manpower he devoted to maintaining his personal grudge against her.

A purple and white type of jumpsuit/ Battle suit.

Gemini wore a gauntlet capable of firing missiles from its fingertips. The payloads varied from explosives to self-guided ammunition. The gauntlet reloaded the missiles from an unknown internal source, and was also capable of releasing electric shocks powerful enough to render a person unconscious.

From "The Ron Factor"

Gemini is voiced by Maurice LaMarche.

Retrieved from "https://kimpossible.fandom.com/wiki/Gemini?oldid=35052"
Community content is available under CC-BY-SA unless otherwise noted.