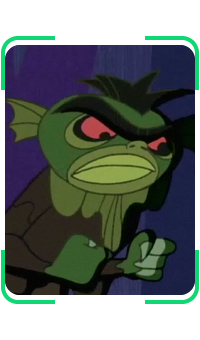 Gil Moss was a former childhood bully of Ron Stoppable. He was accidentally mutated by overexposure to the toxic lake at Camp Wannaweep. Gil initially blamed Ron for this and swore to get revenge on him.

When Gill was human, aka Gil with one 'L', he had greyish-olivine skin, thick lips, shaggy black hair and wore a black shirt and pants as a teen, and had dark circles around his eyes.

As 'Gill' in his first appearance, he had greenish, fish scaled skin with black sludge that acted as his shirt and pants, clawed webbed hands and feet, pitch red eyes wtih black pupils, four fangs in his mouth, very thick light green lips, and frills on his neck that act like his gills and a spiked fin on his head to replace his hair with frilled ears, and a black unibrow.

When he evolved as a mutant, he became a giant with a muscular appearance.

Gil Moss enjoyed picking on Ron as a child, though for the most part limited himself to verbal teasing. The only thing Gil seemed to like more than being a bully was swimming. Gil blamed his initial mutation on Ron, who switched his free swim time with Gil in order to avoid swimming, and wanted revenge on Ron. This was likely just an excuse, both to blame anyone but himself for what happened to him, and to continue picking on Ron.[1]

Oddly enough, when Gil was returned to normal and rehabilitated, he began to miss the power of his mutated form, and purposely re-mutated himself. He had also changed his opinion of Ron, and instead was grateful to Ron for introducing him to his mutation. He still, however, wished to mutate as many people as possible, Ron included.[2]

Even as a human, Gil spent most of his time swimming and was presumably quite good at it.

In his mutated form, Gill was a very adept swimmer and capable of breathing underwater. Though his strength had increased considerably, his weapon of choice was the highly toxic sludge that he spat from his mouth. There were at least two types of sludge: one that hardened quickly and was used to immobilize Gill's victims, and one that was highly acidic and used mainly to melt objects. Prolonged exposure to any of the sludge would cause a person to mutate. Once re-mutated, Gill was also able to camouflage himself.

As children, Gil and Ron were both campers at Camp Wannaweep, where Gil was unpleasant toward Ron and called him a "squeeb". The two swapped places during swim-time, because Gil loved the water, whereas Ron refused to get in, as it was muddy green and he feared it was contaminated. Ron was proven right: the lake was contaminated by the toxic run-off from the nearby science camp. As a result of his extended stay in the lake, Gil was transformed into a green, aquatic mutant. He re-named himself Gill: "I added an 'L', you know, as in Gill, as in these things that grew when I mutated!" Gill blamed Ron for his mutation, and wanted revenge. Gill then resided at Camp Wannaweep for a few years, becoming the only person to know it as well as Ron.

Gill later tricked Ron and the rest of the Middleton High cheerleading squad into coming to Camp Wannaweep, where he captured them one by one and attempted to turn them all into mutants. His plan failed, ironically, due to Ron's superior knowledge of the hidden passages, dangers, and hiding places of the camp, as well as the artistic know-how Ron had gained from the arts and crafts sessions he took while not swimming at camp. Ron fashioned a net and trapped Gill in it, then turned him over to Dr. Lurkin, a specialist on genetic mutation.[1]

The Middleton High cheerleading squad was later picked to attend cheer camp at Middleton Community College. Due to plumbing problems, the camp was relocated to Camp Gottagrin, which was really just Camp Wannaweep with a fresh coat of paint and a clean lake. Gil, having been cured, was the Brookdale mascot and greeted Ron as an old friend. Ron was suspicious, however, and convinced that Gil was still his enemy. Ron's paranoia caused most of the camp to turn against him, but once again, he was proven right when he followed Gil to a hidden, contaminated grotto. There he witnessed Gil diving in and emerging as a new and improved, even more mutated Gill, who was just as determined to mutate everyone around him. Ron dove in as well so he could effectively fight the new Gill, and emerged as a mutated beaver creature. Gill was once again defeated, thanks in part to Kim Possible and Bonnie Rockwaller, who managed to work together and trapped Gill, yet again, in a net. Gill was sent back to Dr. Lurkin for more treatment, while Ron and the other campers were treated on site.[2]

Although Monkey Fist was credited with being Ron Stoppable's arch-foe, Gill was notably the only villain in the series that could truly be described as being totally obsessed with vengeance on Ron. Despite it having been his own choice, Gill blamed Ron for his own exposure to Camp Wannaweep's toxic lake and the resulting mutation. This, despite the fact that Gill came to miss the mutation once it was gone, and eventually even thanked Ron for his involvement. This did little to lessen his so-called grudge, however, and he repeatedly devoted much effort to turning both Ron and his companions into unwilling mutants.

Gill before being mutated

Gill is voiced by Justin Berfield who was famously known for playing Reese on Malcom in the Middle.

Gill made a cameo appearance in "Sick Day" as one of Dr. Drakken's possible replacement when Shego caught Kim's cold.