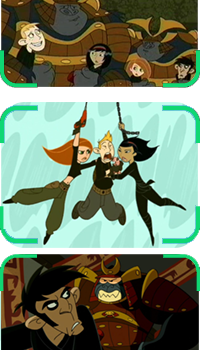 Ron is enlisted by, Yori, his lady friend and classmate from the Yamanouchi Ninja School to help find their missing Sensei, who they suspect has been kidnapped by Monkey Fist. A suspicious, and jealous, Kim pursues them.

Monkey Fist sees DNAmy as she remove her mask

Monkey Fist: That's impossible! It was purely a professional relationship!

DNAmy: (Bear hugs him) (cheerfully) You keep sayin' that but I know you don't mean it. (Bear hugs him again) Ohh, come here! (Tries to kiss him)

After DNAmy has chased Monkey Fist out of the temple…

Mission outfit plus goggles, helmet and bag with para-sail.

Usual casual outfit along with schoolbag.

Mission outfit along with hiking bag, suitcases and orange life-vest.

Mission outfit along with backpack.

Other Images From This Episode

Kim meets Yori for the first time and is immediately suspicious - and jealous.

That awkward moment when Ron has to tell Kim the secret of the Yamanouchi school.

In the clutches of DNAmy's henchmen.