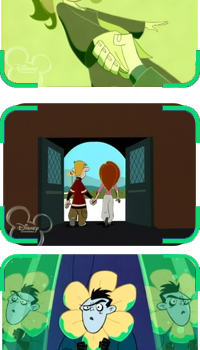 High school graduation nears for the Senior class, but Warmonga's return jeopardizes everything as Team Possible goes through their toughest odds yet to save the planet.

The episode begins with Kim and Ron on their way to spoil another one of Drakken's plots. This time, Drakken is located somewhere in some snowy mountains. Ron is excited for graduation- mainly because there is no way that he can lose his pants while wearing a gown. Meanwhile, Drakken is busy preparing his latest world domination plot: killer plants. Apparently, he will be able to control the world by commanding an army of mutant plants. He has a backpack thing full of green liquid which he can use to shoot out mutant plants. Just then, Kim and Ron arrive. Drakken tests out his new device, shooting out a bunch of green liquid… which blossoms into a pretty tree full of flowers. There was nothing evil about it. Frustrated, Drakken commands Shego to "do what you do!" as he reconfigures his backpack. Shego and Kim proceed to fight. Drakken finally fixes his backpack- only to find that Rufus has tied the hose part of the backpack up, rendering it useless. Kim then crashes into Drakken, sending him into one of the huge towers of green liquid behind him. It all spills out, leaving Drakken's lair bursting with flowers. The liquid also mutates Drakken… growing pretty, large petals out of his neck. Not that frightening. Kim and Ron escape amidst all of the confusion and head back to Middleton.

Later, Ron is working at Smarty Mart. Seeing Barkin, he starts bragging about how perfect his life currently is. He's the star of the football team, he is dating the most popular girl in school, and he is about to graduate. Barkin then remarks that as a twelfth grader, he used to be just like Ron- but after graduation, his life went downhill. He warns Ron that nothing can last forever and that after graduation Ron's life will also head to downhill. Sightly upset, Ron then heads over to Kim's house. There, he finds her sifting through a mountain of college acceptance letters. While Kim has been getting them for weeks, Ron has not even received any letters yet. This, combined with what Barkin said earlier, freaks Ron out and he leaves.

Dr. Possible is golfing with his friends and brother at the Middleton Country Club. While there, he sees what he assumes to be vandalism on one part of the lawn. The camera then zooms out, and it is revealed that a large, mysterious insignia has been burned into the turf.

When Dr. Possible heads home, he and Kim discover via the news that the strange insignia has been burned into golf courses worldwide. Concluding that golf courses must equal Duff Killigan, Kim grabs Ron and heads out to Killigan's lair. There, they discover that Duff is not the one behind the symbols- in fact, one has been burned into Duff's very own lawn. Strangely, Wade can't seem to get a good signal to talk to Kim. Since he cannot arrange a ride, he sends Kim and Ron back to Middleton by plane. At the airport, Kim notices that her graduation has made the cover of a magazine. Ron's face is halfway in the picture on the magazine- causing him to remark that he is already being pushed out of the picture.

Back at school, Kim and Ron talk with Monique about their excitement for graduation. Or at least, Kim talks - Ron is quiet. It is almost the end of the day, and Barkin has been called in to supervise the Seniors' last hour of high school. Felix, who is the valedictorian, asks Kim to say a few words at graduation. She agrees. During the period, the lights start to flicker. However, Barkin dismisses it as a lame attempt at a twelfth-grade prank - blaming Ron specifically, despite Ron sitting nowhere near the light switches. The last few seconds of school begin to count down… but just as the minute hand on the clock reaches the twelve, there is a sudden power failure. Barkin then gives his own rendition of a school bell, and the twelfth graders rush out, finally free from high school.

After school, Kim and Ron head to Bueno Nacho for some food. There, Ron finally loses it and confides his fears to Kim. She reassures him that graduation is not "the end of the world," but Ron is not completely convinced. Kim then heads home, and she confides to her mother that she too is scared about graduation. Her mom, in turn, reassures her. Outside, Jim and Tim successfully launch a rocket satellite they have built. They plan to use it to watch Kim during her dates.

It turns out that Kim's Nana had flown in for the occasion. Kim's whole family is there to see her leave high school. She goes upstairs to change into her graduation robe. Through a cute montage, we also see Ron getting ready for graduation. After Kim is fully dressed, with her hair in a new style, she and her family head off to graduation. A few seconds after their car pulls away an alien space object crashes down onto their house, destroying it.

Ron is fighting his jitters in the bathroom at school right before graduation. There, Master Sensei appears to him, telling him that his greatest challenge will soon come. Ron does not understand the warning and heads off to join Kim for graduation.

Kim and Ron meet up outside the sports-field, waiting for their graduation ceremony to start. Kim tells Ron that she has a confession to make. But before she can, she and Ron are separated as the Seniors are ordered to sit in alphabetical order.

Back in Drakken's lair, Drakken is trying furiously to rid himself of his mutant petals. Every time he pulls one out, though, they pop back up. Suddenly, an alien object lands beside the lair. The pair go out and take a look, and eventually, a beam of light shoots out from the sky onto Drakken, and he starts rising into the sky.

At graduation, Kim tries to tell Ron something, but he cannot hear her. She is then called up by Felix to speak at the podium. As she begins her speech, a ray of light shoots down from the sky onto her. Just like Drakken, she rises into the sky. Ron runs through the crowd towards the stage and reaches up to try and grab onto her, and he does - but he fails to pull her back down and tumbles to the stage. As soon as the aircraft departs with Kim on board, everyone panics and start fleeing. Mr. Barken is particularly hysterical, yelling "RUN PEOPLE! IT'S THE END OF THE WORLD!". Ron, who remains on the stage and watches the incident, then he lifts his fist in the air and yells "OH, AM I THE ONLY ONE WHO SAW THIS COMING?!"

Kim finds herself inside an alien spaceship, held captive along with Drakken. It turns out Warmonga and her "battlemate", Warhok, have kidnapped them. She and Warhok kidnapped Drakken for deceiving her, and Kim for defeating her. They plan to get revenge by taking control of Earth, Kim and Drakken's home planet….

Ron: Kim, we're breaking up and we're graduating!
Kim: No, we're not.
Ron: (freaking out) So we're not graduating?! Oh, I know I should have taken another P.E. class!

Kim: Ron!
Ron Reiger: What?
Kim: Not you, my Ron!
Ron Stoppable: What's going on? Is Reiger hitting on you, KP?!
Kim: Ron! Don't fear the future!
Ron Reiger: Yeah, it's gonna be great. Everybody's gonna have a robot!
Kim: Reiger!

The banner at Kim and Ron's Graduation says the following:

Retrieved from "https://kimpossible.fandom.com/wiki/Graduation,_Part_1?oldid=36635"
Community content is available under CC-BY-SA unless otherwise noted.