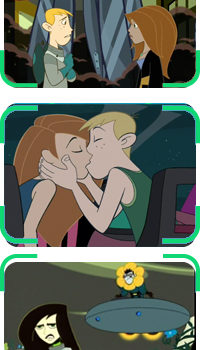 Graduation, Part 2
Broadcast Information
US Broadcast Number:
87
Disney Channel US Premiere:
September 7, 2007
Merchandise
iTunes Releases:
Unknown
In part two of the double episode finale, after both Kim and Drakken have been taken captive, Ron and Shego must race to rescue them from the clutches of Warmonga and Warhok, and together the four of them must find a way to save the world from alien invasion.

Everyone (sans Kim) has gathered in the Middleton High School auditorium to regroup. Barkin is crying hysterically, prompting Nana to banish him to the nurse's room. Meanwhile, Ron, Dr. Possible, and Wade are trying to figure out what is happening. The entire world has been taken over by Warmonga and Warhok. They take out the world's electricity, and then proceed to attack with indestructible tripod-like robots. Ron and Dr. Possible rush off to find a rocket to rescue Kim with at the Middleton Space Center.

When Ron and Dr. Possible reach the Space Center, they are confronted by Shego. Shego joins the two as they race inside, using a generator to power the place. When Dr. P informs Shego that she and Ron will be flying the rocket while she stays behind, Shego objects and steals Dr. P's space suit, leaving him in his boxers. Shego and Ron then jet off in the rocket.

As Shego and Ron approach Warmonga's ship in space, they don't know how to get inside. Luckily, Ron figures out how they can enter through the garbage chute. Inside the ship, Kim and Drakken are left alone and imprisoned. Drakken discovers that his mutation can sprout tendrils which obey his commands. Drakken then uses the tendrils to help him and Kim escape. Drakken and Kim run out and meet up with Shego and Ron.

The four run down to the ship's noisy control center. Nobody can figure out how to shut down the ship, until Ron points out the obvious: an off switch. Rufus finds the off switch and turns t off. The ship begins to plummet. Realizing what has happened, Warmonga and Warhok run over to the four and proceed to fight them. During the fight, Warmonga makes the mistake that shego and Drakken a couple- a claim which Shego furiously disputes. A little too furiously. Warmonga then wonders why Shego felt so threatened by Warmonga the first time the alien appeared, and why she jetted into space this time to save him. Before Shego can object again, Ron uses his space suit to blast off and flies off, carrying Drakken. Shego does the same with Kim. Warmonga and Warhok follow on their own gliders. Everyone escapes the ship just as it explodes in Earth's atmosphere, and they fight in midair as they glide to the ground. After landing, Drakken and Shego run off and Kim and Ron are left to fight.

And so a long fight goes on. Just as the good guys appear to be losing, Drakken and Shego return. They had gone back to Drakken's lair, where they grabbed the rest of Drakken's plant goo. Using the goo, Drakken commands his plants to destroy all the alien tripods and capture Warmonga and Warhok. While the plants do destroy the tripods, they are not strong enough to hold the aliens and Warhawk captures Kim. Just then, Sensei appears to Ron. Sensei tells him that Ron is a mystical monkey master and that he should use his powers to save Kim. Ron does just that, glowing blue and fighting off both aliens, flinging Warmonga and Warhok into space, where they collide with their spaceship and possibly die in the explosion. Everyone is left safe.

Graduation finally commences. Kim gladly accepts her diploma from Mr. Barkin and hugs him as thanks. Mr. Barkin hands in the diploma and states to Kim things are going to be boring without her now. Kim admits he still has Jim and Tim, but this doesn't help since the two of them vaporize Barkin's car. As Bonnie goes to get her diploma, Barkin reveals that she skipped all her classes on the last week of school, but Bonnie states that is because nothing important happens in the last week. However Barkin states the only exception to that was his pop quiz which Bonnie missed; thus Bonnie didn't pass, and that makes her one credit short. This means she doesn't graduate and is forced to go to summer school. She believes this is so unfair, but luckily, her boyfriend Junior is there to help her and tells her that his heart will be with her in the stuffy classroom. Ron then gets his diploma from Barkin, but he comes in his space suit instead of his traditional robes for the graduation which Barkin is not happy about though he states to Barkin he has to stick to his essential Ron-ness.

The following things all happen in an ending montage:

Drakken and Dementor are conversing about the recent events that have happened. Dementor notes the irony in it all as Drakken was terrible at being a mad scientist and doing evil plots but is great at doing things that are good. Drakken doesn't want to talk about any of this and asks for a new topic. Dementor gives in soon and asks Drakken why does he have blue skin. Drakken is glad that Dementor asked that. Drakken then explains it was a funny story (not funny ha ha according to Drakken) that started on Tuesday, but the credits then end before the rest of the story is explained.

Warhok: (holding an unconscious Kim by the leg) Come Warmonga, we will take her as a trophy, she will look handsome beside your Thorgogle spine.

Ron: Oh, complain complain. You know, when life gives you lemons...
Dr.Drakken: I COMPLAIN ABOUT THE LEMONS!

Señor Senior, Jr.: Be strong, my love! I will be at your side through this thing, this..."summer school".
Bonnie: Really?!
Señor Senior, Jr.: No, my actual person will be lounging by the pool, but my heart...my heart will be with you in that stuffy classroom.

The reader board is damaged at the beginning of the episode, with letters missing, but is fixed by the end.

Retrieved from "https://kimpossible.fandom.com/wiki/Graduation,_Part_2?oldid=35910"
Community content is available under CC-BY-SA unless otherwise noted.