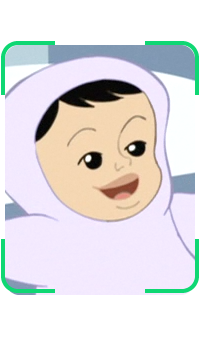 Hana Stoppable is Ron's adopted infant sister who shows a great potential for ninjutsu. Master Sensei is convinced that, like Ron, she has a great destiny ahead of her.

Hana is a naturally cheerful and inquisitive child. For the most part, she is very open to new experiences and is rarely ever upset or unhappy. While some of this is no doubt due to the positive influence the Stoppable family has had on her, she still seemed to be a very happy baby even shortly after she was placed with them.[1]

Hana proved to be far more agile than a normal child. Even before she learned to walk and talk, she was capable ofr unning up walls and across ceilings with no visible difficulty. Ron unknowingly increased her already advanced agility by teaching her the Flippies dance, which in Hana's hands became a dazzling display of acrobatic leaps.

Hana proved to be far stronger than a normal child. She can lift and throw Monkey Fist with one hand[1]. Even an action as simple as mimicking turning a page in a book becomes a credible defense with Hana's strength behind it.[2]

Hana had a curious ability to react accordingly to threatening situations and people, without any guidance from her family and friends. In short, she seemed to instinctively know when someone had bad intentions in general or for her specifically, and either attacked them or defended herself as she saw fit. Whether this was due to some innate ninja skill or some great mystical power was unclear.

Little was known about Hana's Japanese origins except that she is linked to the mythology of the Yamanouchi Ninja School.[1] It was eventually learned she spent some time with (and perhaps might even be related to) Yori and Master Sensei prior to her being put in adoption.[2]

Hana made her first appearance when Mr. and Mrs. Stoppable adopted her as their daughter. They turn their son, Ron's, room into a nursery for Hana and moved him up into their attic, without Ron's prior consent, input or even awareness. This lead to Ron to viewing Hana as "The Intruder" at first. However, Ron eventually came to fully accept Hana as his little sister. He connected with her better than he did with his own parents, and thus Ron became a very devoted and protective big brother to Hana.[1]Hana soon began to develop some very odd behavior, such as walking on the ceiling, but only when she was left virtually alone with Ron. Consequently, Ron was able to turn the tables on his parents by belatedly informing them that Hana was actually a ninja child. He and Kim were able to confirm that it was Master Sensei who placed Hana with the Stoppable family, in the hopes that Ron would guard and train her. Ron's "training" has been more effective than even he first realized: Hana has proven capable of defending herself and avoiding capture when left on her own, even in the face of incredibly one-sided odds.[2] She was the only person to stop the Yono by defeating Monkey Fist, in which she did while dancing to Ron's laptop, which played when it fell out of his pocket.[2]

Ron took considerably longer to warm up to Hana, but has become a very devoted and protective elder brother as time went on. Out of her entire family, she was closest to him, as was evident by "brother" being one of her first and most often spoken words.[2]

Even Rufus began playing with her right away.[1]

While she almost never reacted to anyone with disapproval, Hana tended to get along well with anyone who was close to Ron, once introduced. Kim was a little overwhelmed by how active Hana was, but she still enjoyed crawling all over Kim.

Hana reacted well to Yori and Master Sensei, though that may have been more because she actually recognized them and was happy to be reunited with them.[2] It is possible that Yori is a biological relative of Hana's or was at least was her primary caregiver before she was adopted by the Stoppable family because Yori explained to Kim and Ron that "Hana is like a little sister" to her.

The Yono and the Han

According to an ancient scroll, there was a mystical force composed of two great powers: The Yono and The Han, also called the Monkey Mystic Weapon. Monkey Fist managed to summon Yono the Destroyer, in hopes that he would be guided to the mysterious Han, and then use both powers to rule the world. Monkey Fist eventually realized that the Han was not an item, but a person. Hana herself, affectionately called "Han" by her brother Ron.

However, his attempt to unite the two powers ended in utter failure. The Destroyer could not bring his destructive powers to bear upon a dodging Hana, and Hana would not allow Monkey Fist to even touch her. As per the deal of using the power of the Yono, Monkey Fist ended up turned to stone, while Yono and Hana parted peacefully from each other.[2] Due to her young age, Hana didn't understand Yono's intentions, and was very friendly toward him and Monkey Fist during the encounter.

Hana was voiced by Grey DeLisle.

Retrieved from "https://kimpossible.fandom.com/wiki/Hana_Stoppable?oldid=35437"
Community content is available under CC-BY-SA unless otherwise noted.