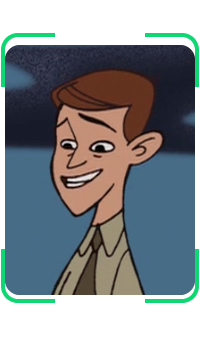 Hank Perkins is a business-smart young temp originally hired to assist Duff Killigan, and then Dr. Drakken. His exposure to evil convinced him that being bad had big promise[1], so he styled himself as a "Villainy Consultant" to get in on the ground floor.[2]

Hank Perkins was a curious villain in that he was not actually villain-like. Polite, friendly, and forever upbeat, he was the last person one would associate with evil.[1] Despite working among some very dangerous people, Hank's head for business served him well, in that he was quickly able to win over even the biggest doubters with undeniably fast and efficient results.[2]

If nothing else, Hank Perkins was highly educated man. He had a law degree[1], and graduated with honors from business school. Hank was able to turn Dr. Drakken's typical, easy-to-foil operation into a highly successful evil business behind the extremely convincing cover of a cupcake company, to the point where even super-genius Wade was stunned when he discovered the true minds behind Hank's Gourmet Cupcakes. Hank accomplished this all without attracting much suspicion, and with little effort also solved Drakken's frequent issues of a lack of finance and poorly motivated henchmen.[2]

Hank Perkins began his career in evil with little more than a law degree and a can-do attitude. Hired by Duff Killigan as a temporary lackey, Hank helped him steal the mysterious Ray-X from Ron Stoppable's home. Killigan was soon sidelined by a cold, and Hank ended up working for Dr. Drakken, who was in a temporary alliance with Killigan. As Drakken and his sidekick Shego both had colds, Hank basically had free run of their lair, and managed to capture Jim and Tim Possible, who tried to recover Ray-X. However, he was no match for their big sister Kim, and even with the still-sick Shego assisting as best she could, they were both subdued in short order.[1]

Hank Perkins had a fairly positive relationship with everyone he assisted, no doubt because he always got results. Dr. Drakken seemed especially fond of him and got swept along in the idea of running an evil business. Even Shego, who initially had a big problem with being overlooked, rapidly adjusted to Hank's presence once bribed with the title of Chief Operating Officer for Random Mayhem, and increased benefits.[2]

Kim Possible was confused enough by Hank's friendly demeanor that she actually stopped to ask if he worked for Dr. Drakken, then proceeded to defeat him once she had confirmation.[1]

From "Odds Man In"

Hank was voiced by Rob Paulsen

Retrieved from "https://kimpossible.fandom.com/wiki/Hank_Perkins?oldid=31361"
Community content is available under CC-BY-SA unless otherwise noted.