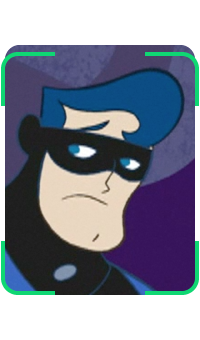 Hego is the recognized leader of the Go City-based superhero team/family, Team Go, and his blue glow grants him super-strength. In his civilian identity, he is also the manager of the first Mucho Grande Bueno Nacho. It is not public knowledge that Shego is his sister.

Hair: Black; blue when powered up and in costume

Hego seems to take care of his family, apparently because no one else is around. In the episode, "Mathter and Fervant," Hego is the only one that stays back while the others go on a hero cruise. Though he has to stay behind when the rest of Team Go went on the cruise since he could not switch his work hours, he wished he had gone on that cruise despite saying someone had to 'hold down the fort'. Unlike the other members of Team Go, Hego has been in three episodes rather than two: "Stop Team Go", "Go Team Go", and "Mathter and Fervent", the last of which was Hego's sole appearance without the rest of the team. Hego is also the most professional member of Team Go, shown by his constant talk of rules and protocol. This trait seems to be innate, as even when turned evil (see "Stop Team Go") he still is focused on such rules and 'proper' form, except for acting as evil henchmen instead of heroics.

While Hego is what most people would consider the epitome of a hero, others would consider him the epitome of one from a Saturday morning kids show. He follows and falls for every cliche and trope there is when it comes to his duty, including corny dialogue, scenery chewing and a startling lack of foresight. He did not realise that having a computer system that his enemies could use to call him any time they want in the team's base was a security risk until it was pointed out to him and even went as far as to argue proper procedure in the middle of combat. He also refuses to believe that Shego is irredeemably evil, even after her other brothers admit it in a heartbeat when she beats Hego into the floor.

Hego was apparently a major contributing factor in Shego leaving the team. He was so annoying that after five minutes Ron said "I'm starting to see why Shego split".

Hego's brothers are Mego and the Wegos. While his sister is Shego.

Although they met in the awkward situation of Kim accidentally absorbing his super-strength, Hego treated Kim and Ron as trusted comrades almost immediately. This was especially notable because Team Possible was occasionally underestimated by their professional peers. Yet Hego appeared to trust Kim to handle his superpower temporarily, and did not hesitate to share the secrets of Team Go with them. He also admired Ron for his positive thinking in a crisis, appreciated him as a devoted Bueno Nacho customer, and was happy to later help Ron with a school assignment.

Hego, as part of Team Go, has enemies such as Aviarius, Electronique, and The Mathter.

Hego is voiced by Christopher McDonald.

Retrieved from "https://kimpossible.fandom.com/wiki/Hego?oldid=35662"
Community content is available under CC-BY-SA unless otherwise noted.