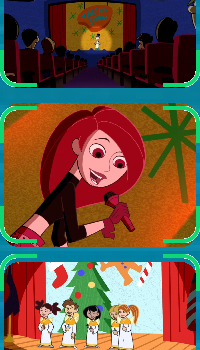 Hidden Talent
Broadcast Information
US Broadcast Number:
39
Disney Channel US Premiere:
January 2, 2004
Merchandise
DVD Releases:
Kim Possible: The Complete Second Season
iTunes Releases:
Unknown
Ron signs an unwilling Kim up for the school talent show after Bonnie announces her intent to crush any competition. Her plans to sing are interrupted when Wade begins acting erratically and orders Kim and Ron to recover teleportation technology from Professor Dementor. Technology which Kim begins to suspect may have not been stolen after all.

Kim, Ron and Rufus are in the Middleton High cafeteria, with Wade showing them new gadgets he created. One gadget is a pair of night-vision goggles that look like sunglasses, and another is an emerald class ring that has a laser and works as a back-up Kimmunicator.

Bonnie (pushing her way through the talent show line) Step aside, people. This is all just a formality. My older sib's have won this contest the last four years straight. I am not about to break the Rockwaller family tradition.

Bonnie: Just trying to save my fellow students from utter humiliation.

Kim: And your talent is what? Singing… your own praises? Acting… obnoxious?

Ron: Lets stick to the facts. Fact 1, you are signed up. Fact 2, you won't give Bonnie the satisfaction of backing out now.

Ron: You really need to take this unproductive anger you're feeling toward me and channel it into your act.

Ron: This is bad, Kim. You're gonna risk our reputation in front of the entire school, and you can't even hit the high notes?

Kim: Fact one: It's my reputation on the line here. Fact two: You are the one who got me into this. And fact three: I can, and will, hit the high notes. I can do anything!

Dr. Drakken: With this teleportation module, I shall be able to instantly transport myself into any high-security area I please! Imagine it Shego, the sky's the limit! Fort Knox! The Louvre!

Dr. Drakken: Exactly! Wait. Was that a serious suggestion or are you mocking me?

Dr. Drakken: (describing his death device for Kim with flip-charts) First, you will be sealed inside a reinforced, titanium box. The box shall then be dropped into this bottomless chasm. Next, I will fill the chasm with water. Then, sharks and a man-eating squid will be released into the water, and finally, I will freeze over the top of the water with a 6-foot-thick sheet of ice.

Shego: Huh? Wait… If the chasm is "bottomless", how can you fill it with water?

Kim (referring to Drakken's plot): Beats humiliation at the talent show, I guess.

Kim: (to Drakken) Which part of "she can do anything" do you not comprehend?

Mr. Barkin: And the winner of the Middleton High Talent Show is...Ron Stoppable!

Mr. Barkin: Proving that quantity is indeed better than quality.

Retrieved from "https://kimpossible.fandom.com/wiki/Hidden_Talent?oldid=36265"
Community content is available under CC-BY-SA unless otherwise noted.