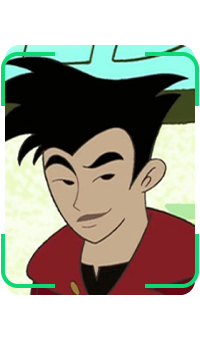 Hirotaka is a top student from the Yamanouchi Ninja School in Japan. He and Ron Stoppable switched schools for a week in an exchange program, and Hirotaka became an instant favorite among Middleton High School's female students.

Hirotaka is very confident in his interactions with others. He is especially comfortable around his female peers, and typically has little trouble gaining their favor through a combination of his looks and attitude. Although it does not necessarily appear to be Hirotaka's intention to take advantage of people, he is accustomed to and does nothing to prevent various girls granting him favors. He also appears to be no stranger to dealing with jealous guys, or being pursued by multiple girls at the same time.

In terms of skill, Hirotaka appears to be one of Yamanouchi's more advanced students. He possesses considerable speed and stamina, and seems to prefer Mantis style kung fu in combat. His brief spar with Kim suggested that his proficiency in the style exceeded her own. In addition, he was able to avoid fighting football player Brick Flagg merely by dodging all of Brick's attacks, allowing the quarterback to simply tire himself out.

Hirotaka was pursued by and seen with several girls at Middleton High. Among those, he showed prolonged interest in both Kim and Monique, invited them to attend an Oh Boyz concert with him, and appeared amused by their fighting over him. However, Hirotaka referred to Bonnie Rockwaller alone as his "number one girlfriend", a title Bonnie was especially happy to flaunt in front of Kim and Monique.

While in Middleton, Hirotaka wore a red motorcycle jacket over a black shirt, grey pants, and black boots.

He is voiced by John Cho.

Hirotaka is a top student from the Yamanouchi Ninja School in Japan. He and Ron Stoppable switched schools in an exchange program. Hirotaka gained the attention of virtually every teenage girl at Middleton High School while there. He seemed interested in Kim mostly for her martial arts skills. He is very aware of the attention he gets from the ladies.

In terms of skill, Hirotaka seems to be one of Yamanouchi's more advanced students and possesses a great deal of stamina through his training. When he asked Kim to demonstrate her skills to him, although neither of them actually hit the other, Hirotaka was shown to have been somewhat faster than Kim when fighting her, and in the end Kim was left winded, while Hirotaka had not even broken a sweat. He also seems to prefer a more defensive style of combat, not fighting back unless absolutely necessary. When Brick tried to pick a fight with him at Bueno Nacho because of being angered at the attention Hirotaka was getting from all the girls, Hirotaka was perfectly happy to simply evade Brick's attacks and let him exhaust himself to the point where Brick could no longer put up a fight.

He only appeared in the episode Exchange. Kim and Monique were fighting each other for him, when they began overtly crushing on him. They were concentrating more on fighting each other, rather than winning his affections, which apparently, Bonnie had already won, a fact of which they were unaware of until they escorted him to the airport.

Retrieved from "https://kimpossible.fandom.com/wiki/Hirotaka?oldid=32703"
Community content is available under CC-BY-SA unless otherwise noted.