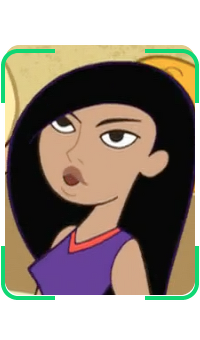 Hope is a dusky olivine-skinned girl with black eyes and long straight black hair. She does not have a mole on her cheek.

When she is not wearing her cheer uniform, she wears a pink one-piece mini with simple black heelless ku-li slippers.

During gym class she wears one of the variant school uniforms of a white tee-shirt and orange shorts[1].

As an acrobatic cheerleader, Hope has much of the same athleticism which Kim is known for. Furthermore, she may have an interest and ability in Track and Field[2].

Hope is mostly seen in the company of Tara, often at the left shoulder of Bonnie Rockwaller.

Big Mike from detention, [3] has befriended at least Hope and Tara, as they have been seen in his company at school social events such as dances.[4]

She went to the prom with the Track and Field captain, whose name was not mentioned.[2]

Hope, the one without the mole, and Marcella, with the mole.

Hope with three other cheerleaders and Monique.

Grounded: Hope with her parents

Hope and Tara are usual companions

Big Mike, friend to cheerleaders. Hope on the left.

Hope (top-left) is bound to the walls of Cabin 13 by Gill’s muck.

Retrieved from "https://kimpossible.fandom.com/wiki/Hope?oldid=36388"
Community content is available under CC-BY-SA unless otherwise noted.