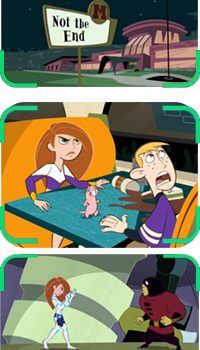 It is senior year, and Kim and Ron are officially dating! Bonnie disapproves of their relationship, telling them that cheerleaders always date jocks. Ron caves in to the idea and tries out for the football team... with the help of Kim's battle-suit. Meanwhile, Dementor has his own plans for Kim's battle gear[1].

Kim and Ron are dancing at their high school prom. After they kiss, Kim smiles at Ron. Her smile, along with the music, turn demonic before she dissolves into a mass of green sludge and reveals herself to be a Synthodrone. Ron freaks out at this and jerks awake, screaming. Rufus also wakes up from the noise and hushes Ron, pointing out that it is 3 o'clock in the morning. Ron now panicking, grabs his phone and calls Kim, asking her if she really is a Synthrodrone. Kim reassures him, telling him that he was having a nightmare and is about to hang up but Ron also asks her if she and him really kissed - to which Kim confirms they did but she also tells him it will not happen again if he continues to call in the middle of the night. After both hanging up, Ron lies in bed and notes how “love is complicated.”

Later on, they both set to foil Professor Dementor’s latest plot, catching him in an underground lab. When Ron mentions that he is now Kim’s boyfriend, Dementor fails to believe him, despite him insisting that it‘s true. Dementor wonders how Kim managed to find him and Kim pulls out the to-do list that he dropped while he stole the ultrasonic drill, taunting him for making the job of finding him “that much easier“. Ron reads out the list, reminding Dementor that one of his “to-dos” was to call his mother. Kim tells him that he can call her from prison. Dementor simply says that he’ll add one more thing to his list -- to eliminate Kim Possible, and fires up the stolen drill. She shields the attack (and Ron) with her battle-suit and jumps up to the platform Dementor is on, ready to apprehend him. Before she’s able to however, Dementor (surprised at Kim’s enhanced abilities) asks her when had she gained her new battle-suit. Kim and Ron explain that the suit is relatively new and virtually indestructible. Dementor then sets his henchmen on Kim and aims the drill at Ron. Kim easily takes out the henchmen, leaving Dementor to resort to using a ray gun on her instead. She catches the blast with the battle suit and returns the projectile, knocking the gun out of Dementor’s hand to his frustration. Ron calls to Kim for help, giving Dementor the opportunity to escape. She shuts off the ultrasonic drill and rushes to see if her “so-called” boyfriend is ok.

When they get to school, Monique and Ron are excited about finally starting their senior (and final) year of high school. Kim, though she admits to them that she is happy about finally being a senior, is still bummed about how her and Ron had their first mission as high school seniors but that Dementor managed to get away. Ron helps her feel better, but then Bonnie Rockwaller comes over and openly expresses her disapproval of Kim and Ron's relationship. Bonnie tries advising Kim to dump Ron and start dating a jock--her reasoning being that it's practically a rule for cheerleaders, especially since they are seniors now.

Kim dismisses the idea and tells Ron not to obsess over it either. However, throughout the day Ron does obsess over the idea, at one point thinking that his role as Middleton Mad Dog must count for something. He eventually feels it does not matter either way as he is convinced Kim would never trade him up for a jock, or anyone else for that matter. Unfortunately, at this moment he overhears Monique and Kim talking about trading up - Kim agreeing with Bonnie it being time to trade up. Ron panics and quickly leaves without hearing the entire conversation, believing Kim was talking about dumping him for a jock instead of the actual topic of the conversation: Monique's cell phone. Ron then decides that either Kim should not be a cheerleader or that he needs to be a jock. Seeing a poster for the football team, Ron tries out for the position of the school’s new quarterback.

The coach, Mr. Barkin, doubts that Ron is quarterback material with the name “Stoppable” but Ron insists he can make the cut. He quickly gets on Barkin’s bad side during practice and Barkin orders him to crabwalk a lap where he comes across Kim and Monique. When he tells them he is trying out for the football team, Kim immediately suspects that it is because of Bonnie’s trash talk from earlier. Ron denies this, instead saying he is doing it for college. Kim then gets a call from Wade, but all she gets for her newest sitch are GPS coordinates from a strange old lady. The lady’s cat, Princess, is stuck in a tree. Ron attempts to save the cat, but she attacks him and sends him back down covered in cuts, so Ron instead suggests that Kim try saving her as she is wearing her battle-suit anyways. Kim quickly leaps up the tree and encourages Princess into her arms. Unbeknownst to Kim, Princess is not all she seems.

After rescuing her cat, the old woman insists that they be thanked properly and invites them into her house for some cookies. While she is in the kitchen, Kim and Ron note how strange and even creepy the woman is (including her ornaments and other collectibles), choosing to have the cookies 'to go'. Princess then suddenly jumps from Kim’s arms and fires a beam at her. Narrowly dodging and now alerted that they have been set up, Princess able to analyse Kim’s battle-suit. Before Kim or Ron can react, all the exits in the house are locked down with metal slabs and the old lady reveals 'her' true identity as Professor Dementor.

Ron mocks Dementor for wearing a dress, but Dementor insists that it is a housecoat. He quickly shrugs off the argument and orders his collectibles to attack the two. The collectibles throw plates and fire hard candies at them while Kim tries to repel them with her battle-suit. As she is about to counterattack, she is stopped by the sofa (actually one of Dementor's contraptions) which quickly pulls her to the ground and swallows her. Dementor laughs in triumph at the apparent end of the teenage heroine when the sofa begins to expand. Kim bursts through the sofa using the battle suit's shielding, sending parts of the sofa flying across the room and destroying the remaining attack collectables. She then goes for Dementor who simply grabs the data collected by the electronic cat and tosses it to Kim, who catches the now disabled machine. He then escapes through a cupboard fashioned into a rocket, leaving Kim and Ron with the cat which. After a moment, the two notice that the cat is counting down in a self-destruct sequence. Kim hastily grabs Ron and they both make their own escape through the hole in the roof. Seconds after landing, the house and all its contents are vaporized by the self-destruct sequence. Kim calls up Wade and tells him that Dementor had the “home field advantage”, inspiring Ron to “secretly borrow” Kim’s (relatively new and virtually indestructible) battle-suit.

The next night, Ron sneaks into Kim’s bedroom while she's out babysitting and takes her battle-suit out of her closet to wear to football practice. With the suit underneath his uniform, Ron has another try at getting on the football team. The suit naturally gives him incredible strength and speed, easily landing him as Middleton’s new quarterback and becoming a hero in his first match - astonishing everyone from Mr. Barkin to Kim and the rest of the cheer squad. Bonnie finds Ron’s new skills to be too good to be true, and although she seems jealous at Ron for apparently "stepping-up," even Kim cannot help but be suspicious about Ron's sudden improvement.

After the game, Kim and Ron celebrate at Bueno Nacho. When Kim expresses her doubts about Ron's newfound abilities, he just tells her how, like herself, he is full of surprises. Professor Dementor then busts in through the roof of the restaurant. After some banter, he reveals the results of his analysis of the battle-suit, a magnetic controller, and attempts to take control of Kim using her battle-suit. He instead takes control of Ron, who is still wearing the suit under his uniform. Both Kim and Dementor take a few moments to catch on that something is not right, with Kim realizing that Ron was wearing it right before Dementor activates the shield on the suit. This destroys Ron's clothes and reveals to Kim the true source of Ron's sudden football skills. Dementor then controls Ron to attack Kim, during which Ron explains why he stole the suit in the first place. Kim, initially angry at Ron for stealing, lying, and cheating his way onto the team, explains to him the misunderstanding about the conversation he overheard. As soon as he accepts that Kim would truly never trade him up and apologises for his behaviour, he throws Kim into the back of the restaurant - rendering her unconscious. Dementor releases Ron from the suit to put it on himself, intending to destroy Kim Possible with his own hands. Rufus signals for Ron to toss him over to Dementor’s control panel so he can stop him. Rufus, able to control of the suit himself, forces Dementor to repeatedly punch himself. Ron immediately makes his way over to Kim and helps her up and they both watch as Dementor hits himself over and over again.

On his second match, Ron, now without the aid of Kim's battle-suit, uses his "mad running away skills" honed through years of going on missions with Kim to dodge the opposing team's merciless attacks and score. The team's victory cements Ron's position as a running-back and, a jock. However, Ron is still punished by Mr. Barkin after the game for cheating his way on to the team in the first place and is told to crab-walk twenty laps.

Juniour Prom suit, from his dad who bought it but never attended his own prom.

Ron in his usual mission outfit.

Ron in his usual casual outfit.

Ron in his outfit for football team tryouts.

Ron in football outfit and armour with Kim's battle suit underneath.

Ron in football outfit without armour, wearing battle suit underneath his clothes.