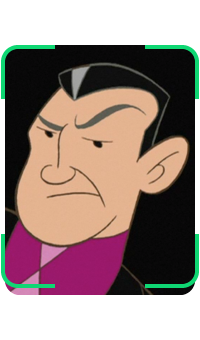 Jack Hench is an entrepreneur and the mind behind HenchCo Industries. He supplies almost every evil character who can afford his prices with weapons, tools, and henchmen. He even proudly claims to have coined the term "henchmen".

Jack is well groomed and a sharp dresser. Like any good businessman, he appear to dress for success.

He has a thin streak of grey in his hair which matches his eyebrows.

A businessman first, Jack is a smooth and glib talker. He is constantly upbeat with clients and potential customers, although ready to turn ugly on those who cheat and steal from him.

He trains and provides henchmen, probably to anyone able to pay, but notably villains such as Professor Dementor.

While Jack Hench depends on villains such as Professor Dementor buying from him to stay in business, he is all too aware of the high risks of theft in dealing with them. He particularly dislikes Dr. Drakken, who is consistently cheap, rarely has money to spend, and is far more accustomed to sending Shego to steal for him.

Jack Hench has an uneasy, unstable relationship with Team Possible. Technically, as a supplier of technology and manpower to the very villains they most often fight, and because he maintains his own personal supply, he is their enemy without question. On the other hand, Team Possible recognizes that certain items are best kept out of the hands of villains such as Drakken, so they have both "aided" Hench when he was stolen from, and in turn stolen from him to prevent the sale of such items. In short, Team Possible is only welcome at HenchCo when invited by Hench, which is rare.

Jack Hench is voiced by the late Fred Willard.

Retrieved from "https://kimpossible.fandom.com/wiki/Jack_Hench?oldid=36238"
Community content is available under CC-BY-SA unless otherwise noted.