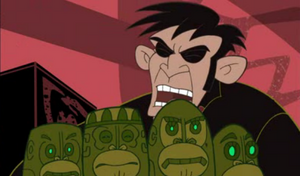 The Jade Idols are mystical monkey artifacts, which legend states were used to imbue warriors with Mystical Monkey Power.[1]

According to legend, the four Jade Idols were each kept in separate temples, built by the followers of Monkey Kung-Fu. When the idols were brought together, they imbued the warriors with Mystical Monkey Power. But because they wished for no one else to gain the power, the followers kept the idols separated.[1]

Lord Monty Fiske contacted Kim Possible and asked her to obtain one of the Jade Idols from a temple in Cambodia. Kim succeeded, but the statue was soon stolen by a ninja. Unknown to her at the time, the ninja was actually Fiske, who had already collected the other three idols. With the set complete, Fiske was prepared to gain Mystical Monkey Power. An unexpected visit by Ron Stoppable forced Fiske to alter his plans: he gained the power in front of Ron and began calling himself Monkey Fist, but intended to kill Ron so that no one else would learn of the power. Ron evaded Monkey Fist long enough to use idols, gaining Mystical Monkey Power for himself and Rufus. Instead of trying to defeat Monkey Fist purely in battle, however, Ron ultimately saved himself by destroying the idols, ensuring that no one else would ever misuse them to gain the power.[1]

Monkey Fist with all four idols

All four idols destroyed.
Add a photo to this gallery

Retrieved from "https://kimpossible.fandom.com/wiki/Jade_Idols?oldid=35236"
Community content is available under CC-BY-SA unless otherwise noted.