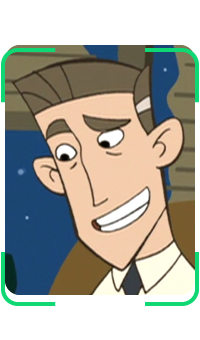 Dr. James Timothy Possible is a brilliant rocket scientist. He is devoted to his work at the Middleton Space Center, and to his family. He has a very fatherly personality, hearkening back to the father and scientist stereotypes of the 1950s.

James was a friendly, easygoing, and occasionally absentminded man. He was always very encouraging of his children's hobbies and desire to learn, because as he was often known to say, "Anything is possible for a Possible."

A brilliant and adventurous scientist, if a bit absent-minded at times, James was part of a team of researchers at the Middleton Space Center. When a problem fell within his area of expertise, he was always a valuable asset to Kim in her fight against evil.

James was also a genius who had a great understanding of a highly difficult field of cybertronics.[1] In grad school, he built a cybertronic battlesuit with a plasma blaster for a lab rat he named Pinky Joe Curly Tail.[2] But strangely, despite being a genius James could not do his own taxes even though his job would involve a lot of calculating.

James had a habit of leaning on equipment and accidentally activating it. He has launched a rocket a week ahead of schedule[3], caused a super magnet to de-pants Ron[4], and almost deleted the Hephaestus Program, which he had been working on for a number of years, from his computer.[1]

James graduated from the Middleton Institute of Science and Technologies.[5] In college, he knew a young Drew Lipsky, who would eventually become the supervillain Dr. Drakken. It was the scornful laughter of James and his friends, Bob Chen and Ramesh that supposedly drove Drew over the edge after he had embarrassed himself through his invention of 'robot dates' who would later become the Bebe robots.[3]

At some point, he began working at the Middleton Space Center. He had apparently been there for quite some time, at least since Kim was eight years old.[6]

He has a wife, Ann, a daughter, Kim, whom he calls his "Kimmie-cub", and his twin sons, Jim and Tim, named after him. His mother, "Nana" Possible, now living in Florida. His older brother, Slim Possible, owns a ranch in Montana, along with his niece Joss. It is unclear whether Kim's cousin Larry and his mother June are related to James or his wife.

Though Kim loved her father, she was sometimes embarrassed by his affection and desire to be close to her. She was also greatly frustrated by his tendency to see her as his little girl, even after she was well into high school.[6] James was very protective of Kim when it came to her dating, despite being very uncomfortable discussing boys with Kim himself.

Jim and Tim seemed to take more after their father, as they spent much time building experimental rockets around the house, occasionally borrowing some of his tools from work to do so. Though he disapproved of them being disruptive in general, James did seem to appreciate both their genius and their interest in his work.

Though he lived apart from them, James seemed fairly close to his side of the family. He would typically take his entire family to visit his mother "Nana" in Florida, or his brother Slim and Slim's daughter Joss in Montana.

It was unclear whether Kim's cousin Larry and his mother June were related to either James or Ann. James seemed accustomed to defending and dealing with some of their odd personality quirks, and encouraged his own children to never mock them.

James had an overall friendly relationship with his colleagues from the Middleton Space Center, as well as his old college pals Professor Ramesh and Bob Chen.

Though sometimes visibly annoyed with how often Ron would pop in uninvited to meals, James did not really seem mind his presence around the Possible home. Still, he felt the need to at least threaten Ron after he began dating Kim.

A falling out between James and his college friend Drew Lipsky resulted in long-lasting grudge, at least on Drew's part. James genuinely regretted this, especially when he discovered that Drew had become Dr. Drakken, Kim's arch nemesis. However, Drakken still made many of the same mistakes he did in college, and so James could usually not resist teasing him on his various failings.

His married life was stable and loving, with no signs of conflict between himself and his wife Ann with the exception of the time his wife got annoyed with him for taking advantage of Kim's memory loss to make her like his favorite show Captain Constellation. Though they both had fairly busy schedules, they still frequently found time to spend with each other and their children.

He was voiced by Gary Cole.

Retrieved from "https://kimpossible.fandom.com/wiki/James_Possible?oldid=35594"
Community content is available under CC-BY-SA unless otherwise noted.