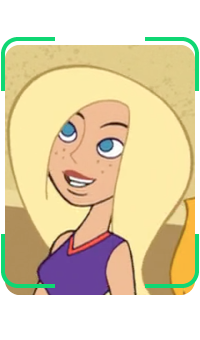 Jessica is a cheerleader in Middleton High School and minor character in Kim Possible.

Jessica has long straight blonde hair, light blue eyes, fair yet lightly freckled skin, and is taller than the rest of the squad. When she is not wearing her cheer outfit, she wears a saffron yellow blouse, an orange plaid skirt, and orange shoes.

Jessica is almost always seen smiling and at rare times when she is seen frowning, it is usually because she is either bothered, disappointed, or scared. Jessica was never seen angry.

Not much is known about Jessica.

Jessica has the same basic cheerleading skills that Kim, or the rest of the cheerleaders have.

She has a possible twin sister[1]. She is friends with the cheer squad, and is seen spending time with Bonnie and Kim and a few others.

She went to Prom with Steve Foley.

It is speculated, but not confirmed, that Jessica might have more than just one speaking line. They are the following:

-"Are Robbie's eyes really the color of the sea?"

-"Did you get Dexter's email address?"

(Red dress) At the Prom watching the news with several other people.

At the Homecoming King & Queen Election

Jessica and… Jessica, in street clothes

Retrieved from "https://kimpossible.fandom.com/wiki/Jessica?oldid=36306"
Community content is available under CC-BY-SA unless otherwise noted.