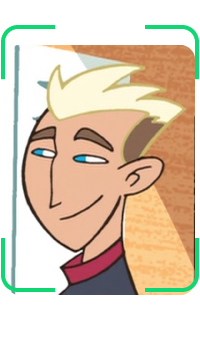 Josh Mankey was Kim's crush during her late sophomore and early junior years.

Josh is an easy-going and incredibly mellow person. He has only displayed very mild reactions to the assorted weirdness he witnessed when Kim's missions cut into her personal life[1][2].

Josh went to the Spirit Dance with Kim during her sophomore year and they apparently dated for a short time during her junior year, but he never appeared or was mentioned after Kim's junior prom.

Ron tells Kim during a Spirit Week report that Josh's middle name is "Wendel", but the authenticity of this statement is highly questionable since Kim asked Ron if it was true and Ron replied "it could be"[3].

Josh is a talented artist and musician. He showed Kim a mural that he painted when they were on a date[2] and was part of a local band playing at the Halloween party Kim wanted to attend during the Centurion Project incident[1].

During Kim's early sophomore year she would typically turn into a nervous wreck when she was around Josh, but with Ron's help eventually built up the courage to ask Josh to the Spirit Dance[3].

Later, during Kim's early junior year, Josh called Kim and asked her to go on a date with him in, which Kim did despite the fact that Drakken had sprayed her with a formula that made her vanish when she became embarrassed. Thanks to Ron retrieving the Aurora Orchid, Kim was cured and Josh gave Kim a kiss at the end of the date[2].

Despite Kim and Josh going on a date during the Aurora Orchid incident Ron's actions when Monkey Fist turned Kim into a monkey point towards Kim and Josh not being a couple immediately following their date[4].

Although by the Middleton Days of their junior year Kim stated that her and Josh had grown apart, moved on, and split up[5], which implies that they likely became a couple at some point following the full monkey incident.

Josh was seen with Tara during the Middleton Days parade preparations of her junior year, and after Tara dated an unnamed boy at some point before Kim had to deal with the team-up of Drakken and Motor Ed[6], [5]

However, they apparently broke up as Tara later went to the prom with Jason Morgan, the basketball team star forward[7].

Josh shows Kim a mural he worked on

Josh kisses Kim on the cheek

Josh was originally voiced by Breckin Meyer in Crush, who was known for playing Jon Arbuckle in the two non-animated Garfield movies, and in all other appearances by A.J. Trauth, who in real life, has also worked together with Kim's voice actress, Christy Carlson Romano, in Disney Channel's Even Stevens.

Josh is mentioned, but not seen in So the Drama.