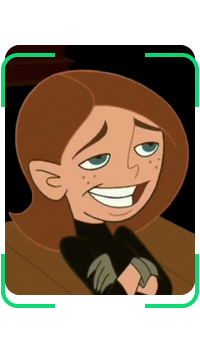 Joss Possible is the daughter of Slim Possible, and is Kim's cousin. She lives on a ranch in Montana which has cybertronic robot horses.

Joss is very slim and about a head taller than her cousins Jim and Tim. She resembles Kim quite a bit except for being shorter and having freckles, which Kim had when she was younger.

Joss was very similar to Kim in that she was perky, adventurous, and something of a tomboy. Because she considered her own life boring, she was always eager for new adventures and faced potential danger with excitement rather than fear.

Joss looks up to Kim and, for a time, Kim's exploits were a source of obsession for her. She knows every one of Kim's missions by heart. She was all too eager to prove herself to Kim. While Kim found it flattering at first, the novelty quickly began to wear thin.

Ironically, after seeing Ron in action, Joss began to find herself a new hero in him. Even though he has plenty of fear to go around, this fear has never stopped him from helping Kim. This began to show her how a person can succeed when being herself and that she did not have to transform herself into someone else to be better.

Despite her skinny frame, Joss proved to be fairly athletic, though somewhat uncoordinated or inexperienced at times.

Having lived on a ranch with robot horses, Joss has a level of familiarity with mechanics, especially her father's inventions. She makes her own makeshift weapons, which are effective despite their simplicity. Kim admitted she herself lacked these abilities.

Little is known about Joss or her history. She was first introduced when the Possible Family and Ron visited her ranch during summer vacation. She appears to be around the age of the tweebs.

During this visit, Joss and Slim helped the other members of the Possible family in foiling a scheme by Dr. Drakken to transform the worlds' geniuses into lackwits using brainwave altering cowboy hats, before learning that she needed to follow her own path in life. Joss ultimately ended up saving Ron from Shego by deactivating her father's robot horse, "Ol' Tornado". I

Two separate pictures of Joss can be seen on the family photo wall in Kim's house during her graduation.

Joss seemed to get along well with most members of her family. She was, as expected, very fond of Kim and eager to spend time with her. She deeply respected Kim to the point of obsession.

At first, she did not know who Ron Stoppable was, despite being Kim's best friend and sidekick. Shortly after meeting him, Joss encouraged Ron to face his fear of mechanical horses. It didn't work out well, but she did eventually save him from the very same horse when it ran wild. The encounter left her with a new appreciation for Ron, who she began to idolize from that point on for being able to face the odds despite his fears—a courageous quality of a real hero.

Joss was also very excited that she had a chance to meet Rufus, who she instantly recognized from her close studies of Kim's missions.

Joss wore a near-exact version of Kim's original mission wear, though in her own size: a black turtleneck, cargo pants, and gloves.

From "Showdown at the Crooked D"

Showdown at the Crooked D

Joss was voiced by Tara Strong.