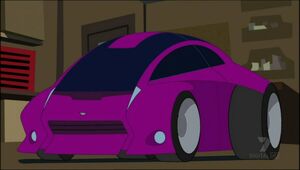 Kim Possible's car was a Roth SL Coupe. It was her father's old car which he gave to her. Jim and Tim first fixed, then heavily modified it for her.[1]

Kim's first car was her father's vintage Roth SL Coupe, also known as a "Sloth". Although he claimed she could drive it for years if she took good care of it, all anyone else seemed to remember about Sloths was that there had been a recall on them, and even Wade commented that he was unsure it was technically a car anymore. Kim preferred not to be seen in it, but more importantly, she could not even get it to stay in one piece, much less start it. Kim's younger brothers Jim and Tim Possible offered to fix and upgrade her car, but only if she agreed to give them rides whenever they wanted. Kim reluctantly agreed, and the boys soon delivered on their promise, but immediately collected on her promise to drive them around.

When the Sloth was unable to keep up with a car that Motor Ed had fashioned from stolen Kepler prototype booster parts, the twins upgraded it yet again as a point of professional pride, and called the result a Roth SL Coupe 2.0. Though the Sloth 2.0 was able to get the job done, it was virtually totaled by the combination of the Kepler's destructive shock wave, and wear and tear from the pursuit. This time however, Jim and Tim decided to fix and upgrade Kim's car free of charge.[1]

At some point in time, the twins gave the car aquatic capabilities.

Off road mode
Add a photo to this gallery

Retrieved from "https://kimpossible.fandom.com/wiki/Kim%27s_car?oldid=35063"
Community content is available under CC-BY-SA unless otherwise noted.